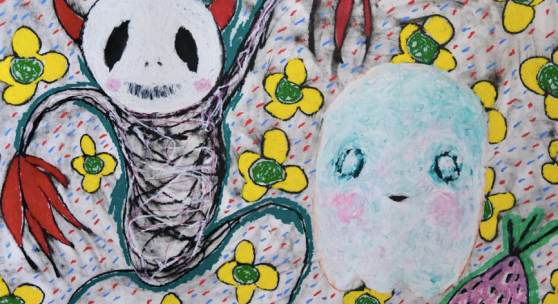 November 17, 2021 (Shoreditch, London) — D’Stassi Art is pleased to present Ghosts, a solo exhibition of New York-based artist Adam Handler’s signature phantom characters. The exhibition brings together Handler’s iconic arsenal of creatures to address his recurring interest in mortality and how to cope with fearing loss. Coming together to depict a brilliantly saturated universe, these paintings collectively and kindly offer a whimsical mediation on the transience of life. Ghosts will be on view from November 19th to December 5th, 2021, with an opening reception on November 19th at 7 PM. RSVP at info@dstassiart.com.

Ghosts unfolds through the gallery under a soft installation of clouds that echo the otherworldliness of Handler’s works on display. Visitors are surrounded by 45 monumental, yet distinctly not intimidating, paintings which feature new and familiar characters. Composed with the multi-colored acrylic paints and oil sticks that are characteristic of Handler’s uniquely vibrant universe, these works developed from earlier series of friendly wide-eyed ghosts and abstract girls. For this exhibition, his images of ghosts are introduced to new monsters and explore boldly hued backdrops of starbursts, UFO’s, rain, polkadots, drips of paint, and wild flora.

In these new works, Handler pushes the emotions of his figures both metaphorically and physically. Whether standing alone, or paired with companions as in Magnolia Ghost Buddies (2021), the unexpectedly warm and nostalgic characters have evolved to testify to today’s uncertainty. Recent works such as With you ghost and Your are the best Ghost (2021) introduce text as an access point for dialogue and comfort, showing remarkable bravery and resilience in the phase of the unknown. Cheekily depicted wolves and monsters, pink pineapples, technicolored rain showers, and brightly accessorized girls all come together in sweeping marks of oilstick.

Handler’s exposure to painting first began during childhood in his grandparent’s framing factory, a period of his life defined by an innocence and familiarity that he seeks to connect with in his practice. With his first London solo exhibition, he further explores the youthful sensibility and simplicity that inspires him. Using oilstick to render imaginative, accessible figures inspired by personal experiences, Handler’s medium of choice allows for a direct, embodied relationship to his subject matter that honors the autobiographical nature of his practice. Handler seeks out a tension between the shadows of death and vivacity of his aesthetic, a binary that allows him to provide his viewers with alternative ways of processing life and fate.

As the reality of destiny and its unpredictability renders itself more visible, Handler’s works have become more complex, relatable, and dystopian than their earlier counterparts. Braving this turbulence are the pastel landscapes of his UFO Ghost Abduction series. The imposing, deeply opaque beams stand in stark contrast to Handler’s typical mark making, shooting out of the suspended objects and enveloping the still blissful ghosts. Dealing with the more timely than ever concept of displacement and taking on a spiritual quality, the series proposes surrendering to the inevitable as a framework for accessing peace.

Across his canvases, Handler comes to terms with the psychological and physical consequences of our unpredictable modern world. Through his unique lens on the laws of nature and life’s stark truths, Handler creates a surprising connection between the dauntingly unknown and the comfortingly familiar, inviting his viewer to consider alternate realities. Ghosts will be on view from November 19, 2021 to December 5th, 2021, with an opening reception on September 10th from 7 PM to 1 AM. RSVP at info@dstassiart.com.

About the Gallery
Since the brand's inception in 2017, D'Stassi Art has established a unique platform for the world's most inspiring emerging talent. In the traditionally exclusive art world, D'Stassi Art looks to discover, encourage and help introduce clients to works of art based purely on how passionate we are about them. The gallery has helped to introduce a variety of the art world's clientele to important contemporary artists through immersive and inclusive events.

D'Stassi Art's main goal is to be as open and transparent as possible with a clear purpose to diversify contemporary art audiences. In its reluctance to simply follow the traditional gallery formula, D'Stassi Art is quickly becoming a key player in a world where art doesn't have to be experienced in an elitist, sterile and often silent white-walled room. The gallery and its staff act as storytellers: primarily introducing clients to the story of some of the world's most gifted artists.

About the Artist
Adam Handler was born in Queens NY and grew up on Long Island. As a young child and adolescent, he spent countless hours at his grandparents framing factory in New York City. There, his passion for the arts grew and it became inevitable that he too would discover the many possibilities of art.

Handler studied Life Drawing in Italy and went on to graduate from Purchase College with a major in Art History. He has also studied craft design with Jorge Nieves and printing color photography with Debra Mesa-Pelly. Handler has mounted solo exhibitions throughout New York which include the Fred Torres Gallery in Chelsea and Vered Gallery in East Hampton.

His work has also been shown extensively at major art fairs which include, Art New York, Art Market Hamptons, Art Context Miami and the Armory Print Fair. In addition, Handler’s work has been included in numerous exhibitions throughout the United States, Canada, Middle East and Europe.