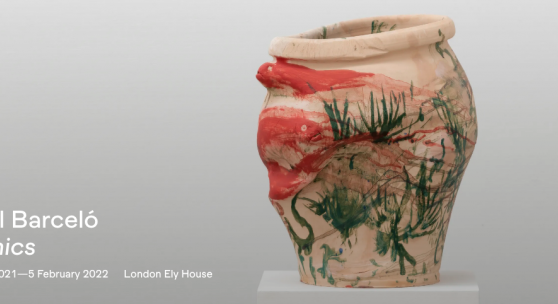 One of the most renowned Spanish artists of his generation, ceramics have long been central to Miquel Barceló's practice, which also encompasses paintings, performances and installations. Inspired by ancient techniques from Mali and his native Mallorca, Barceló’s ceramic sculptures are captured in a moment of dissolution or becoming, a state of ‘continuous transformation’. They seem to evolve before our eyes into other forms: sprouting leaves, rippling with marine life or folding in on themselves.

Each work is experimental. Each work is a trial run for another that will probably never exist. I think this is as true of my painting as my ceramics – or any other thing I make. – Miquel Barceló

The artist first began working with clay in the early 1990s, when he established a studio in Mali and was introduced to the ancient Dogon earthenware methods by local women. ‘I learned the Neolithic technique,’ he explains. ‘I gathered clay from the places the potters have been going to for centuries.’ He became versed in the fundamentals of creation – ‘starting at the absolute beginning’ – using humble materials such as earth, animal dung and straw, which were baked at low heat or dried in the sun. In this way, he connected with prehistoric artistic creations, which have survived as pottery shards or paintings on cave walls. Barceló’s time in West Africa proved formative, both for his life and his work. Here, he forged an intimate connection with the earth as a material for his artworks and his body as a tool for creation.

Traces of these unconventional beginnings are apparent in his irreverent approach to the medium and emphasis on a sense of visceral materiality. For Barceló, artistic creation is a direct way of relating to the world around him and the ceramics bear the marks of his bodily engagement: ‘When baked with wood fire, clay keeps track of every trace, no matter how slight. Even the slightest contact, a brush with the fingers, will leave a clear trace in the clay after firing.’ The central role of the body is exemplified in his Paso Doble performance, which he conceived with choreographer Josef Nadj for the Avignon Festival in 2006. Barceló describes it as ‘a way of staging the tools and gestures of my work with clay. The body as a tool. The body in positive and negative, mould and cast.’ The Paso Doble performance has since been staged in New York, Madrid, Zurich, Barcelona, Paris, Athens and Mali as a tribute to those who introduced him to the art of ceramics.

Upon returning to Mallorca, Barceló began creating ceramics in an old brick factory, using the clay from his region as his ancestors did before him. ‘The clay from my village is renowned for its whiteness and fineness,’ he recalls. ‘This clay was extracted for centuries from a little hill called Puig de Sant Nicolau where I used to play as a child. Not one pebble – a mountain of white clay, slippery as soap.’ Traditionally used to create vessels decorated with motifs such as shells, sea urchins, flowers and seahorses, this idea of ‘clay collage’ becomes something entirely new in Barceló’s hands. The vessels are intentionally deconstructed and expressively distorted, with ripples and folds or perforations that open them up to the surrounding space. In gestural, expressive strokes of paint, he depicts the simplified forms of fish and bulls, botanical and human figures, recalling the cave paintings in Lascaux where he spent time alongside palaeontologists. Barceló’s painterly approach also becomes a form of metamorphosis that bridges different media: ‘The subject of many of these works is painting, how clay becomes painting, canvas, drawing. In short, a transmutation.’

This idea of metamorphosis is fundamental to the artist, who recently created original watercolours for a new edition of Franz Kafka’s La Métamorphose, first published in 1915. This transformation is made manifest in his ceramics, which also undergo an alchemical change when fired in the kiln: the malleable clay becomes hardened, brittle, and may even crack due to the high heat. These chance effects are integral to his ceramics: ‘They are often fissured and I accept the cracks with joy as part of the work.’

The medium has become central to Barceló’s artistic production, forming the basis of several large-scale works. In 2007, he created a 280 square metre terracotta mural for the Palma de Mallorca Cathedral that addresses the biblical miracle of the loaves and the fishes. A year later, he unveiled an installation of thousands of marine stalactites which descend from the domed ceiling of the Human Rights and Alliance of Civilisations Chamber in the United Nations’ Palais des Nations in Geneva. He also created an ephemeral mural for the Bibliothèque Nationale, Paris in 2016, applying gestural smears of clay to its windows before scratching out the outlines of human and animal forms that reference prehistoric paintings.