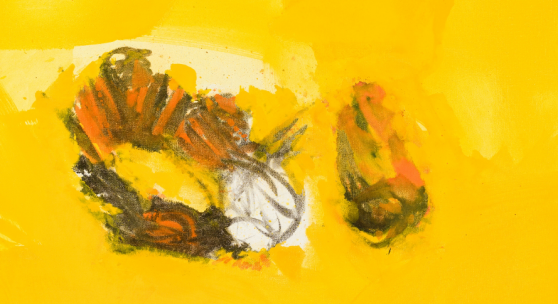 Every conception of utopia, historically, harbors the contradictory seeds of its own disintegration. It speaks of its own impossibility. For me, utopia in its paradoxical essence is a nostalgic, even elegiac, idea. — Lee Bul

Thaddaeus Ropac Paris Marais presents an exhibition of new works by Korean artist Lee Bul. Over twenty paintings from two of the artist’s most recent series will be on display: the sensuous mother of pearl and acrylic Perdu works, and the fantastical Velvet collages made out of fragments of photographic material, paint and mother of pearl.

Lee Bul combines traditional methods and materials and a futuristic aesthetic in her work, exploring the notion of utopia in its imaginary potential to reveal its darker undertones. Born in 1964 of left-wing dissident parents under South Korea’s military dictatorship, she draws on her childhood experiences, as well as European and South Korean culture, to create works that resonate across time and history, warning of the dangers of humanity’s perpetual yearning for an ideal society.

The Perdu works, presented in the main space of the gallery, exemplify Lee Bul’s approach by bringing together past, present and future temporalities through the materials and references they incorporate. Their title alludes to the French writer Marcel Proust’s novel À la Recherche du Temps Perdu (In Search of Lost Time; 1913–1927), evoking universal themes of memory and nostalgia. At the same time, ‘Perdu’ is an arcane military idiom used to describe a sentinel assigned to a particularly remote and dangerous location, and might be read in the context of the ongoing conflict between North and South Korea.

On a formal level, the Perdu works are related to the Cyborg sculptures and subsequent Anagram series the artist began creating in the late 1990s. Part-organic, part-mechanical, the figures that inhabit Lee Bul’s vibrant paintings appear as though in motion, reconfiguring themselves from one painting to the next on the walls of the gallery in search of a final form. Unfixed, these anthropomorphic creatures allow us to contemplate our fascination with progress and the anxieties that surround our constant search for perfection.

Upstairs, in the Velvet collages, Lee Bul constructs shimmering traceries and constellations from small pieces of photographs of her works, reference images and materials from her studio including paint and mother of pearl, which she applies onto rich grounds of silk velvet. The result is an intricate, phantasmagorical landscape with a crystalline architecture that might be found in a city of the future as much as it could belong to a long-forgotten underwater civilisation.

Throughout her practice, which spans three decades, the artist looks for references and materials that embody contradiction. 'I choose what I work with very carefully,’ states Lee Bul, ‘everything has connotations, stories and I utilise them.’ Mother of pearl and velvet in particular, which form the basis of the two series of works on show at Thaddaeus Ropac, interest her because they ‘are related to organisms that come from the inside out.’ Despite its hard appearance, mother of pearl is found on the inside of shellfish, which produce the substance to repair wounds. Velvet, in turn, was originally made to replace hair and fur in clothing, and is made out of silk, which is a secretion from worms.

This duality is central to Lee Bul’s critique of utopia, whose ultimate failure she sees as inherent to the notion itself. ‘For me, utopia in its paradoxical essence is a nostalgic, even elegiac, idea’, she explains. This ambivalence is carried throughout her oeuvre, which seems suspended in time and space, somewhere between dream, reality and nightmare. By confronting viewers with the shortcomings of idealism and the human condition, it is this underlying darkness that gives the Perdu and Velvet works their poignancy and their power.

About the artist
Lee Bul lives and works in Seoul, South Korea. Her 1997 installation Majestic Splendor at The Museum of Modern Art, New York used rotting fish encrusted in sequins as a commentary on the ephemeral nature of beauty and the powerlessness of women, causing a furore and establishing her international reputation as an emerging artist. In 1999, she was selected by curator Harald Szeemann to participate in the International Pavilion at the 48th Venice Biennale, where her work was also shown in the Korean Pavilion.

The Lee Bul retrospective, curated by Stephanie Rosenthal: Crashing, opened at the Hayward Gallery, London and travelled to the Gropius Bau, Berlin in 2018–19, followed by Utopia Saved at the Manege Central Exhibition Hall, St. Petersburg in 2020. Lee Bul received the Ho-Am Prize for The Arts in 2019, awarded to people of Korean heritage who have contributed to the enrichment of culture and arts for humankind.