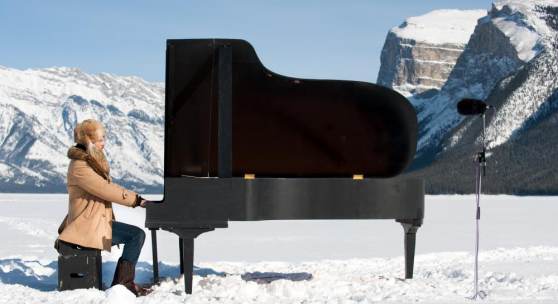 The exhibition offers the opportunity to explore the interplay between Kjartansson’s work and iconic North American imagery through a series of music-combined durational performances caught on film. That is the case of The Visitors (2012), a nine-channel video installation which captures a musical performance by a group of Icelandic musicians, friends to the artist, in a grand, though derelict, mansion in Upstate New York; witness to the splendor of its past days, the nine visitors disseminate in the decaying rooms of the house, offering a hymn to the myth of romantic love (and its dissolution), as well as intimate celebration of friendship and community. Other works in the exhibition include The Man (2010), a single-channel video portrait of African-American blues musician Pinetop Perkins, who died at the age of ninety-seven in 2011, playing blues riffs under the glaring sun; The End (2009) a five-channel video installation featuring a country music arrangement set against the Rocky Mountains, a work that was presented at the Icelandic Pavilion during the 53rd Venice Biennale; and God (2007, co-commissioned by TBA21 and The Living Art Museum in Reykjavík) a single-channel video featuring the artist as a Frank Sinatra-inspired frontman of a 1950s jazz band.

Emotional Landscapes, titled after the lyrics of “Jóga” (1997) by Icelandic artist Björk, explores Kjartansson’s fascination with the American landscape and its musical legacy. An exhibition that marks the 20th Anniversary of TBA21 and homages its fifteen-year relationship with the artist, throughout which the Foundation has supported his performance and art practice with commissions, production, and exhibitions.