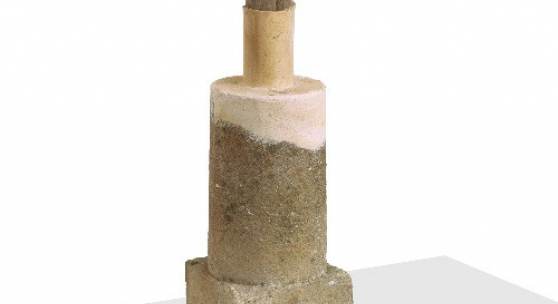 Curated by Luca Massimo Barbero, director of the Fondazione Giorgio Cini Institute of Art History, Joseph Beuys: Fine-limbed is a monographic exhibition dedicated to the leading 20th-century artist, whose birth centenary was celebrated in 2021. Featured in the exhibition will be key early works from the late 1940s and 1950s, alongside a selection of important sculptures and works on paper by this master of conceptual art.

Focusing on Joseph Beuys’ artistic origins, the exhibition not only marks the conclusion of the artist’s birth centenary celebrations, but also a new beginning. Presenting Beuys’ oeuvre at Palazzo Cini Gallery during the Biennale is an opportunity to introduce the artist’s seminal work to new generations and new audiences. — Luca Massimo Barbero

Titled after the principal work on view, Backrest for a fine-limbed person (hare-type) of the 20th century AD (1972–82), the exhibition will explore two major themes of Joseph Beuys’ quest: the body and the human figure; and the important, symbolic role of animals in his visual and conceptual world.

Exploring the symbolic meanings of the human figure and the idea of fertility, as well as the so-called animal figure and its healing powers, Beuys’ early works touch upon contemporary issues such as discussions around gender and the power of nature. — Luca Massimo Barbero

Working across media, Joseph Beuys was one of the most influential, emblematic and multifaceted artists in the second half of the 20th century, and one of the few who was truly capable of making art and life coincide. He considered art the cure for society’s ills, as a positive, healing force capable of awakening individual creativity, fostering political awareness and stimulating social change. His socially engaged artistic practice anticipated themes and approaches that, many years later, still seem contemporary and more urgent than ever: the relationship between human beings and nature, the desire for peace, and artistic endeavour as social commitment and spiritual quest.

Central to the exhibition, the sculpture Backrest for a fine-limbed person (hare-type) of the 20th century AD (1972–82) was cast in iron from an original plaster form that was used as a therapeutic backrest to support an injured body. Completed in 1972 and installed in the vitrine by Beuys for the reopening of the Städtisches Museum Abteiberg in 1982, the sculpture is part of a larger series of works from 1972 that he called ‘Arrested Processes’. Although several versions of this sculpture were produced, this particular work is made unique by its installation as a single piece in the display case. The earthy hue of the iron brings to mind an animal skin, while its shape alludes to the silhouette of a hare. For Beuys, animals such as the hare, horse and stag embodied a lost state of human innocence and an intimate connection with nature. He described the hare as ‘the symbol of incarnation’, which physically re-enacts the cycle of life and death by burrowing itself into the ground. In his view, the hare’s ability to mould the earth into a habitat that conforms to its body is a creative act, akin to humans’ ability to shape the society we live in.

A key early work, Bleifrau (Lead Woman) was created in 1949 when Beuys was still a student at the Staatliche Kunstakademie Düsseldorf. The primordial female nude featured in his early sculptures and drawings as a symbol of the natural world and the realm of the spirit. A similar figure appears in Badewanne für eine Heldin (Bathtub for a Heroine; 1984), in which he combined two existing sculptural components. For the work’s first showing at Galerie Klüser in Munich, Beuys filled the bathtub with water, which was boiled using the immersion heater to give off steam. Recognising that heating and cooling were the active factors in changes of state or mass, Beuys placed the principle of thermal change at the centre of his theory of sculpture. This was expressed through his use of fat, felt and the implied heat of Bathtub for a Heroine. As curator Ann Temkin argues, this ‘doubled as a formulation for the thinking process – opposing dry, dead, “cold” thought with fluid, living, “warm” intuition’. Beuys’ first trial castings for this work form part of Tate’s permanent collection, while other editions belong to the Pinakothek der Moderne, Munich and Hamburg Kunsthalle.

Oven (1950) with Torso (1948), also on view, is the original wood and concrete sculpture from which the upright element of Bathtub for a Heroine was cast. Within his personal iconography, Beuys related women to hares, associating both with the earth, seasonal cycles and fertility. This primal reproductive power is reflected in his female figures’ emphatic hips, turning them into symbols of fertility that glorify under-recognised contributions to society, such as childbearing and rearing. The artist said that ‘the heroic position in my works is generally the female one’, because ‘man has his head buried in the ground, while woman gazes at the spheres’. Bathtub for a Heroine spans Beuys’s artistic career, ranging from the original ‘Torso’ element – carved in 1948 while he was still a student – to the casting of the full grouping just a few years before his untimely death in 1986.