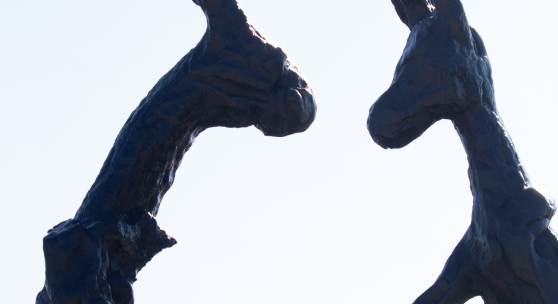 When next at a Barry Flanagan exhibition, take a look around you: you will see smiles on all the spectators’ faces. Positivity and entertainment are central to Flanagan's work and his hares reflect this stance vividly.

Born in 1941 in North Wales and dying in 2009, this British sculptor is regarded as one of the most significant in the history of the United Kingdom and Ireland, where he was a citizen for a time.

It was high time to bring our Knokke hare together with his brothers for the largest retrospective ever of Barry Flanagan's monumental bronzes.

After years of preparation, curator Alexander Tuteleers put together the selection for the 29th edition of Sculpture Link. He worked closely with the Waddington Custot team from the world-renowned gallery in London that has represented Barry Flanagan since the 1970s.

The hare sculpture walk runs along the Zeedijk near the Zwin, where the hares become one with nature in their own habitat. The final destination is the Grand Casino Knokke, where smaller sculptures by the sculptor can be admired from 6 to 15 August 2022.

Let some fun into your life and allow you and your whole family to be captivated by the expressiveness of the hares playing in the dunes. All sculptures are made in bronze and were created between 1982 and 2008.

The hare did not just become Flanagan's model. He found the hare "rich and expressive" and it is no coincidence that it was a hare that was used in many cartoons to express emotion.

He liked to play with their ears and facial expressions. The hares are always doing something: they dance, they box, they think, they are busy working on the computer … In Europe, the hare represents eternal life with the eggs they deliver for Easter. The artist does not care too much about this; he thinks that the hare represents a feeling of freedom. And you will undoubtedly experience that feeling on your walk or bike ride.

Barry Flanagan is a versatile and world-renowned artist. One of the reasons for his appreciation is undoubtedly the unique expression he gives to his bronzes. On the other hand, there is a degree of abstraction that we find in his other work in stone.

The list of his exhibitions between 1966 and today is endless. They took place in notable places such as London, Madrid, New York, Nantes, Oxford and in museums such as MoMa, Guggenheim, Stedelijk Museum Amsterdam, Tate Gallery, the Victoria & Albert Museum…

The link with Belgium has always been close. He made the sculpture for Sint-Pietersplein in Ghent in 1980; he immortalised the Zwin in 1997 when Mayor Lippens bought a sculpture by the artist in Ibiza. Flanagan had a mini-retrospective in the SMAK in Ghent some 20 years ago.

He represented the United Kingdom at the Venice Biennale in the early 1980s and his works can be found in many private collections in Flanders.

All this led to the forging of a link with the HIGHLIGHTS.be exhibition, where Alexander Tuteleers has curated 10 collections that can be discovered in the Magritte room of the Grand Casino Knokke from 6 to 15 August 2022.

The HIGHLIGHTS.be exhibition offers a fascinating overview of the tradition of art collecting in Belgium with works of art by Barbara Kruger, Giuseppe Penone, Marcel Duchamp, Elmgreen&Dragset, Zhang Xiaogang, etc. on display.

What beautiful culture we have in our country!

The 29th edition of Sculpture Link this year will feature the largest exhibition ever of Barry Flanagan’s bronze hares. It runs from June 15 to August 15; you will find most of it outdoors on the Zeedijk-Zoute in the Zwin; the sculpture route ends triumphantly in the Grand Casino Knokke.