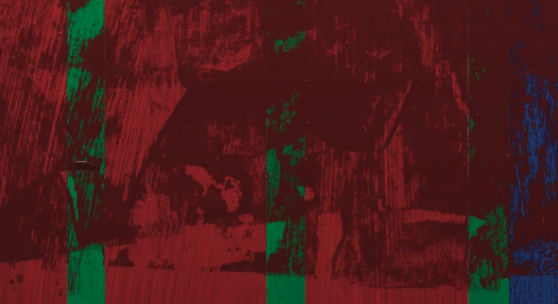 First of all, on the surface on which I am going to paint, I draw a rectangle of whatever size I want, which I regard as an open window through which the subject to be painted is seen. — Leon Battista Alberti, De Pictura, 1435

Liminals is an exhibition of new works by Austrian artist Nick Oberthaler exploring the function of abstract paintings as thresholds for new spatial and visual experiences. Hanging low on the wall, the four large-scale works conceived specially for Thaddaeus Ropac Paris Marais will act as windows into shifting visual dimensions of vivid, contrasting hues, while altering the spaces they inhabit. Alongside them, small, postcard-size works will provide a more intimate insight into the artist’s process, revealing his instinctual approach to texture and colour.

In both a physical and figurative sense, paintings have long been associated with windows, their grid-like architecture serving as a model for the geometric observation of nature that led to the development of perspective during the Renaissance by theoreticians such as Alberti. Oberthaler, in his own visual language which draws on minimalism and geometric abstraction, reinterprets the art historical trope, layering it with a contemporary digital dimension to reflect on the structures that underpin the making and consumption of images today.

The artist uses what he refers to as ‘high-pitched colours’ in the works on view, his fluorescent yellow and silvery grey giving the paintings a distinctly technological appearance. Alongside them, grounds of ultramarine blue and gestural strokes of terracotta red invoke a palette more commonly found in paintings from the 15th and 16th centuries. Working in layers as one would on computer design software, the artist juxtaposes these colouristic universes, allowing them to clash and work together in turn to provoke viewers into an active contemplation.

Across the canvases, precise, geometric shapes seem to provide real-world spatial indications, evoking computer screens, pieces of folded paper and actual windows. The small, pixel-like squares found on the edges of Oberthaler’s paintings, in particular, resemble the markers found on design software, which act as handholds, allowing users to orient themselves and retain a sense of scale in the immaterial digital universe. In the exhibition, these geometric forms challenge and perturb vision as much as they structure it, revealing the elemental grid also as a barrier to observation and generating a loss of scale that is at once disorienting and freeing.

In 2019, Oberthaler began making smaller works, which he sent to friends, artists and collectors as ‘SOS postcards’ with no writing on the back but the date on which they were made. They became what he calls ‘travelling paintings’, evoking the precedent of Marcel Duchamp’s Box in a Valise (1935–41) in which he carried miniatures of his works, as well as the postal art of the 1960s and 1970s, when artists would send ideas and artworks as a way to avoid censorship and circumvent the rigid structures of the art world. ‘On the one hand these could be ideas for not yet realised works,’ says Oberthaler of his smaller works, ‘on the other, they could be seen as zoom-ins or outs: windows offering a view onto a landscape. In the most reduced sense they are simple paintings, questioning compositional parameters and the interplay of colour on a very small picture plane.’

The most graphic among the postcard paintings is made up of bands of colour taken from the Google Maps colour chart of greys, yellows, green and blues. On the top right corner the artist has typeset the letters ‘SO’, and ‘S’ on the bottom left. Together forming a call for help, separately the letters act as coordinates ‘sud-ouest’ (south-west) and ‘south’, echoing the topographical indications that can be found across the larger works on view and hinting at the landscapes that might lie beyond the window-like canvases.

A scientific approach to image-making has fostered the idea of verisimilitude in art since the Renaissance, where the painting acts as a window to a new visual dimension that is nonetheless real. Such an approach continues to influence the way we consume images, particularly those produced by technology, which still lay claim to the objectivity of science. In Liminals Oberthaler reveals paintings as moving planes of colour and form that – more than portals into new worlds – are spaces of invention, unstable and unconstrained, poised on the edges of reality.