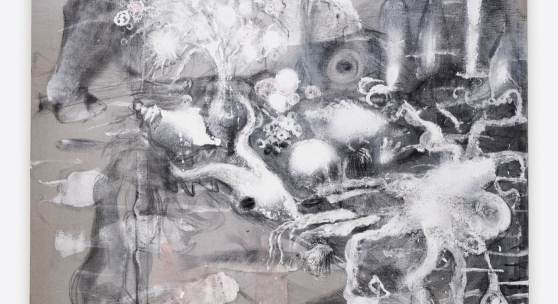 Music from far-away parties, today’s banquets and those from long ago – all on the same very long table. — Miquel Barcelò

Grisailles is an exhibition of new paintings by Mallorcan artist Miquel Barceló, featuring his most recent series of still lifes. It will take place across the gallery’s expansive Pantin space.

Miquel Barceló’s practice is influenced by his Mallorcan surroundings, as well as his profound knowledge of the history of art. His new series of still lifes is rendered in planes of pink, red, yellow or grey, with white accents, in a variation on the art historical tradition of grisaille painting. Behind the paint, the canvas is still visible, resulting in works that are airier and more loosely composed than the artist’s previous paintings of still lifes. Influenced by 17th-century Dutch painting and the Spanish bogedón genre, the life-size diagonal tables that intersect the paintings seem to invite viewers to take part in the banquet laid out by the artist.

Among the objects and creatures on offer can be found a number of highly symbolic elements reminiscent of the vanitas genre that became popular in Dutch still lifes as a warning against overindulgence. Empty shells, bones and skulls act as memento mori, reminding viewers of their own mortality. They are contrasted by the vegetal elements on the tables: bouquets of flowers and dried palm leaves, which symbolise life and rebirth. Beside them, sea creatures that the artist fishes himself on the island where he lives and works, connect the scene to the land. Eels and shrimp, fish and octopi, they suggest a comment on the excesses of 21st-century life, on the precarity of plenitude and on the value of a profound connection with nature.

Grisaille à l'espadon (2022), from the artist’s new series of still lifes, will also be on view at the Louvre from 12 October 2022 until 23 January 2023, as part of the unprecedented Les Choses exhibition dedicated to the genre.

About the artist
One of Spain's most acclaimed contemporary artists, Miquel Barceló is known for his relief-like mixed-media paintings, expressive bronze sculptures and ceramics. An artistic nomad, his fascination with the natural world has inspired richly textured canvases that evoke the earthy materiality of Art Informel, as well as compositions that study the effects of light and the ever-changing colours of the sea. Always experimenting with non-traditional materials such as volcanic ash, food, seaweed, sediments and homemade pigments, his works carry the traces of the fierce energy that animates his creative process.

In the mid 1980s, Barceló began eliminating narrative elements from his works, creating an increasingly unreal space punctuated by holes, cracks and transparencies. This process of simplification culminated in 1988, a year in which he travelled across the Sahara and created his white paintings. Relying on cultural and geographical diversity for inspiration, his time in Mali, where he established a studio, was a formative experience. For Barceló, painting is a visceral way of relating himself to the world and, as such, his art connects with the primitive beauty of cave paintings. He expands the technical boundaries of representation, while remaining rooted in the grand tradition of painting, following in the footsteps of Picasso or Goya when representing bullfight scenes or Baroque painters when completing a commission for the Palma de Mallorca Cathedral.

Born in 1957 in Felanitx, Mallorca, Barceló lives and works between Paris and Mallorca. In 1974, he was admitted to Palma de Mallorca's Fine Arts School, before joining the Royal Academy of Fine Arts in Barcelona. In 1976, he was involved in the happenings and protests of Taller Llunatic, an avant-garde conceptual group. Despite his deep-rooted connection to Spain, he draws inspiration from his time spent in various locations, having lived and worked in Barcelona, Portugal, Palermo, Paris, Geneva, New York, the Himalayas and West Africa.

His public commissions include large-scale sculptural installations for the Chapel of Saint Peter in the Cathedral of Palma de Mallorca (2001-06) and the Human Rights and Alliance of Civilizations Chamber at the United Nations Headquarters in Geneva (2008).