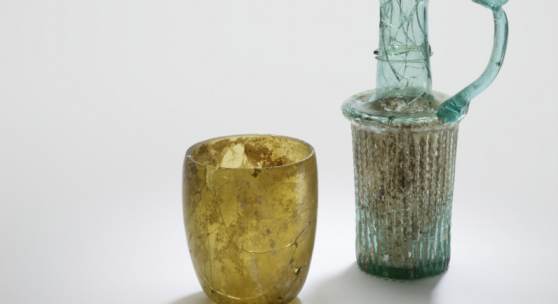 The Archeological Museum at the American University of Beirut (AUB), which presents an overview of archeology in the Near East from the Early Stone Age to the Islamic period, was one of the many cultural institutions affected by the 2020 port explosion in Beirut. Among others, a case displaying 74 glass vessels from the Roman, Byzantine, and Islamic periods blew over and shattered the objects—mixing thousands of fragments of ancient glass with the shards of the glass case and surrounding windows.

Following the detailed puzzle work by the museum team, students, volunteers, and expert conservator Claire Cuyaubère during the first four days after the explosion, 15 vessels were identified and assessed as restorable. Eight vessels were deemed safe to travel to the British Museum, which had the expertise and facilities to restore the objects, as part of a collaborative conservation project supported by the TEFAF Museum Restoration Fund in 2021.

The vessels play an important role in the story of the development of glass-blowing technology in Lebanon in the 1st century BC, when glass production was revolutionized and developed from an elite material to a material available for common, domestic use. Six of the eight vessels were made by early glass-blowing technology in Lebanon and display experimentation in function and form; two vessels may have been imported from neighboring production centers in Syria or Egypt.

The vessels were reconstructed and conserved in the British Museum’s conservation laboratories. Their imperfections caused by the explosion were kept visible by conservators, the damage now part of the history of these ancient objects. Before returning to the AUB museum, the vessels tell their stories from Beirut to London in the exhibition Shattered glass of Beirut at the British Museum until October 23, 2022.

Follow the meticulous reconstruction of these vessels in the latest article on TEFAF Stories.