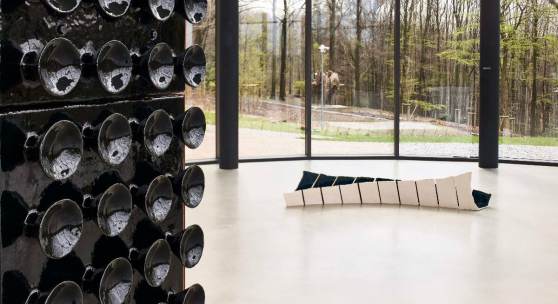 Leunora Salihu, born in 1977 in Prishtina, Kosovo, from very early on, took up a very individual track which she continues to pursue, often combining in her sculptures different materials including ceramic, wood, and metal. Her sculptures, along with the spatial bodies and installations, explore the possibilities and limits of movements by using the repetition of organic and constructive form-elements. She has established a considerable and multi-layered vocabulary of industrial, architectural, and organic forms, which grant her works a sense of functionality, blurring the lines between where the sculpture ends and where the pedestal begins; between interior and exterior.

In 1999, she fled to Germany, moving her studies to the Muthesius Kunsthochschule in Kiel and then further to the Art Academy in Düsseldorf, where she worked with Tony Cragg, and from which she graduated in 2009. Since then, she has received several awards and has been included in a number of group exhibitions at institutions including The National Gallery of Kosovo (2017), Philara Stiftung (2015), Herzliya Museum of Contemporary Art (2015), Temporary Art Centre, Eindhoven (2015), Museum Kunstpalast Düsseldorf (2014/15), and Kunstraum Düsseldorf (2012). Salihu’s first noteworthy solo exhibitions were in 2011/12 at the Lehmbruck Museum in Duisburg and recently at Skulpturenpark Waldfrieden in Wuppertal (2021), Philara Stiftung (2020), and at the K21 Kunstsammlung Nordrhein-Westfalen (2017). Leunora Salihu lives and works in Düsseldorf.