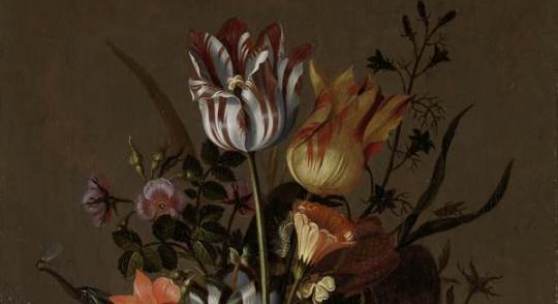 Following the Dutch Winters exhibition, the Rijksmuseum annex at Amsterdam Airport Schiphol is going to present another characteristic aspect of the Netherlands, namely flowers, in the Dutch Flowers exhibition from 21 March to 25 June 2012. Nine exuberant ‘flower pieces’ from the museum’s collection that used to adorn the homes of the 17th-century economic elite are now in full bloom at the airport.

Now an everyday item, cut flowers were prized luxuries in the 17th century. Only the most affluent could afford to have them in their homes and gardens. Growing prosperity in the course of the 17th century, however, eventually caused flower gardens to become more popular. The garden was considered an extension of the home and vice versa, with garden bouquets often decorating the home.

Introduced from Asia around 1600, the anemone, crocus, hyacinth and tulip were immensely popular. The trade in flower bulbs, tulips in particular, proved a highly lucrative business. In around 1630, at the height of ‘Tulip Mania’, an exceptional tulip bulb could cost as much as an entire house on a canal. The average citizen simply could not afford a bouquet for home. The first flower still-lives therefore appeared in the 1630s and 1640s as a means of meeting the demand for flowers. After all, a painting of a flower was much less expensive than an actual bouquet and lasted longer.

The flower still-lives were still in vogue in the 18th and 19th centuries when the rise of large-scale commercial bulb-growing transformed the Netherlands into the flower nation that it remains to this day.

Rijksmuseum Schiphol is located on the completely renovated Holland Boulevard between Piers E and F in the area beyond passport control. The museum is open daily from 7 a.m. to 8 p.m. Admission is free. The Rijksmuseum Schiphol has a permanent exhibition of works by Dutch Masters from the Golden Age drawn from the Rijksmuseum collection. Featuring a temporary exhibition three times a year, it also offers a contemporary Museum Shop with Dutch Design and Rijksmuseum souvenirs.

ING is the exclusive sponsor of the Rijksmuseum Schiphol.

The Dutch Flowers exhibition can be viewed from 21 March to 25 June 2012 at the Rijksmuseum Schiphol.