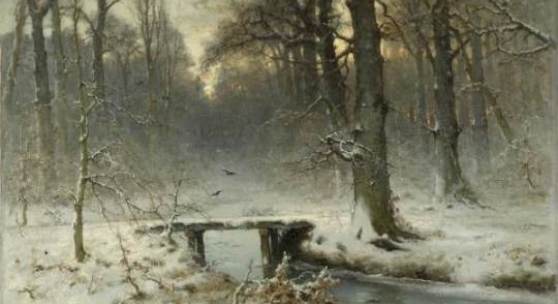 From 21 December 2011 to 26 March 2012, the Rijksmuseum will be presenting the Dutch Winters exhibition at Amsterdam Airport Schiphol. The evolution of the 19th-century winter landscape will be displayed by means of eight atmospheric paintings.

During the first half of the 19th century, Romanticism painting was at its height. In their winter landscapes, Barend Cornelis Koekkoek and Charles Leickert evoke an idyllic atmosphere and a love of nature. Around 1870, a new phase emerged in which the detailed brush strokes of the Romantic periode made way for a more tonal style of painting. The Hague School attempted to depict nature more realistically and to capture the atmosphere of a particular moment. The grey tones in the works of Louis Apol and Anton Mauve are typical of the style. At the end of the 1880s, Amsterdam Impressionism arose as a counterpart to this movement. Willem Witsen and Isaac Israëls use a more colourful palette and smooth strokes to render their impressions of urban and rural life.


Louis Apol, A January Evening in the Wood at The Hague, 1875
Rijksmuseum Amsterdam