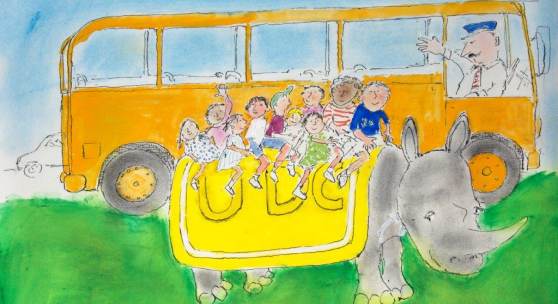 While he was working on what was to be his final book, Mr Gumpy's Rhino, John Burningham (27 April 1936 – 4 January 2019) expressed his wish that the illustrations be sold to raise funds to save the rhino. The much-loved, award winning English author and illustrator of children's books, whose career spanned almost 60 years, was particularly concerned about the devastating changes to wildlife during his lifetime and hoped to raise awareness about the potential extinction of the rhino. The selling exhibition will open with a charity preview at the Chris Beetles Gallery in St James's on Tuesday, 12th May 2020.

His wife and fellow children's book illustrator, Helen Oxenbury said: “'John's final book, Mr Gumpy's Rhino, was published in August 2019. His wish was that all the artwork to be sold and the proceeds to go to a relevant charity such as Tusk. We are thrilled that Chris Beetles, who runs the leading gallery for illustrations, has kindly agreed to host the charity sale.”

Burningham famously illustrated Ian Fleming's Chitty-Chitty-Bang-Bang in 1964, thus helping create one of the best-loved cars in English-language fiction. His first book as author and illustrator was Borka: The Adventures of a Goose With No Feathers in 1963, for which he won the Kate Greenaway Medal for the first time, the second time being for Mr Gumpy’s Outing in 1970. Borka was also named one of the top ten winning books for the 50th anniversary of the medal. John's oeuvre includes over 60 books.

Mr Gumpy's Rhino is dedicated to 'Sudan the rhino', the last known male of only three northern white rhinoceroses in the world, who passed away in 2018 due to age-related complications in the Ol Pejeta Conservancy in Kenya. In this Mr Gumpy story, he is travelling in Africa and rescues a baby rhino, whose mother and father have been killed for their horns. He travels back to England where the rhino grows up to be a helpful addition to the local community.

Andrea MacDonald, Penguin's Editorial Director said: “We’re so incredibly proud to publish John’s third picture-book in the globally acclaimed and beloved Mr Gumpy series – Mr Gumpy’s Rhino – and to support this important cause, which I know was very much in John’s mind when he created the book. John was a frequent champion of underdogs, with his work often engaging with environmental issues and causes he felt passionately about. Mr Gumpy’s Rhino is a superlative example of his oeuvre: arresting and honest, with real heart and a sense of mischief. His is a talent and passion the likes of which it will be rare to see again.” The Chris Beetles Gallery will be selling the 40 illustrations, each with a complimentary copy of the book donated by Penguin, with prices ranging from £1,750 to £6,500. To celebrate John’s life, the gallery will be fulfilling his final wish by donating all sales of the artwork to Tusk, the charity that has earned a reputation for providing highly efficient solutions for funding wildlife conservation programmes by partnering with the most effective local organisations, investing in their in-depth knowledge and expertise.