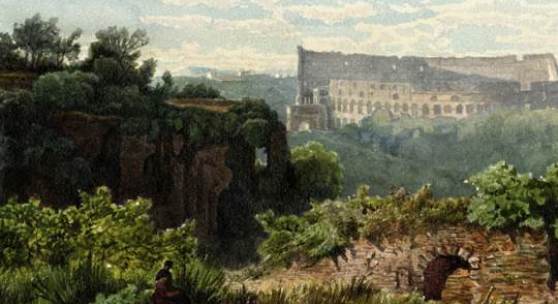 • SIGRID FREUNDORFER FINE ART is showing a wonderful selection of contemporary watercolours by American artist Scott Kelley (b. 1963). They were inspired by the “Legends of Gluskap”, the cultural hero of the Wabanaki, the five tribes of Maine, where Kelley lives. His heartfelt depictions of bears, rabbits, beavers, and deer, portray Gluskap’s relationship with animals, their importance to mankind, his teachings on how to live together, and how to live with nature.
• London dealer GUY PEPPIATT brings over wonderful British works including artworks by one of the most important British topographical artists of the late 18th century, Edward Dayes, whose Carlsbrooke Castle Isle of Wight, dating to 1788, is featured at MDNY. Also featured is a William Callow R.W.S. watercolour A Spring Day at Florence from San Miniato, dating to 1882, and Thomas Rowlandson’s pen, ink and watercolour,The Mid-day Rest.
• PIA GALLO is offering a Salvator Rosa (1615-1673) Study for the Figure of Scylla in pen ink and wash that is a study for the painting Glaucus and Scylla at the Brussels Musee des Beaux Arts. The drawing was once owned by Queen Christina of Sweden. Also showing splendid, hand-painted, fan-shaped gouaches with views of the Gulf of Naples that were meant to be folding fans. Fans and hand screens are known since 3000 B.C. Folding fans – predominantly a fashion accessory – became popular in Europe from the seventeenth century onwards. These two individual fans are made from natural vellum, hand-painted by an anonymous artist. The fans here are not folded nor are they mounted and date from probably around 1800. They show Romantic views of the most frequently visited sights in the Bay of Naples by travelers on the Grand Tour. Villa di Pompejo” (Villa of Diomedes). Gouache on natural vellum. Veduta del Sepolcro della Sacerdotessa Mammia a Pompejano.
• New York dealer L’ANTIQUAIRE AND THE CONNOISSEUR is showing Daniel Dumonstier’s (1574-1646) black chalk and pastel A Portrait of a Young Woman in a Ruffled Collar. Dumonstier retained his celebrity undertaking portraits under the reigns of Henry IV and Louis XII. He was renowned for his prodigious memory and gallant and humorous repartee. He was the appointed painter to King Louis XIII who granted him land and titles. • CRISPIAN RILEY-SMITH of London has titled his exhibition, “Flights of Fancy: Birds and Animals by Aert Schouman and his contemporaries in 18th century Holland.” On view are six Aert Schouman watercolours, including five from the collection of the late Lord Fairhaven, and four watercolours by Abraham Meertens. Plus master drawings by Bandini, Benso Hackert, Zuccarelli and Van Goyen.
• MARGOT GORDON FINE ARTS is staging a show titled “Five Centuries of Faces and Figures.” • LAURA PECHEUR is showing Hendrick de Clerck’s 1570-1629 monogrammed Lamentations and Cornelis Schut’s 1597-1655 The Abduction of Europa.
• MIA WEINER is showing a selection of important works such as Gaetano Gandolfi’s Studies of Two Angels, preparatory for the flanking angels in the 1780 altarpiece “Immaculate Conception” in S.M. Lambarun Coeli, Bologna. She also offers a charming red chalk drawing by a student of the Carracci closest in technique to Annibale, drawing a fellow student or perhaps himself as he works from model sheets of facial features made by Agostino. Plus Filippo Lauri’s Allegorical Figures Frolicking in the Flowers in gouache, Jan Van Kessel’s watercolour of Butterfly, Moth, Rose and Spring of Gooseberries, Salvator Rosa’s Study of a River God for The Dream of Aeneas,” a study for the same figure in a painting at the Metropolitan Museum. A number of 19th century landscape oil sketches and watercolours by Northern European and Italian artists such as Carl Friedrich Heinrich Werner’s A Beautiful Water Carrier, which Weiner says is a stunning example of the artist’s work, and Daniel Israel’s large scale Portrait of a Bearded Man, as strong as any German sheet of the period. • VAN DOREN WAXTER exhibition is titled Emil Nolde and Die Brucke and includes works by Ernst Ludwig Kirchner and Emil Nolde. Nolde’s Meer, also titled Welle, dates to 1926 and Kirchner’s 1912 watercolour and pencil is titled Gerda mit Tanzer.