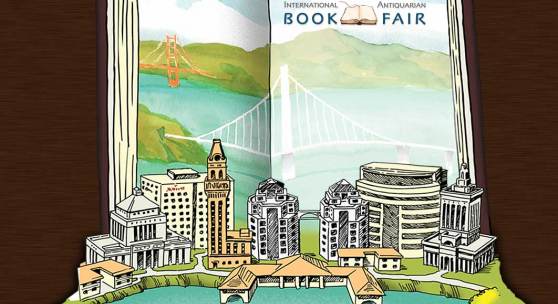 Featuring Highlights from the Special Collections of the F. W. Olin Library at Mills College, and Presentation of the rarely seen photography of Jack London

OAKLAND, CA – The world’s preeminent celebration of the written and printed word returns to Northern California at a new venue in downtown Oakland. The 48 California International Antiquarian Book Fair will run from Friday, th February 6 through Sunday, February 8, 2015 at the Oakland Marriott City Center.

Sponsored by the Antiquarian Booksellers’ Association of America (ABAA) and the International League of Antiquarian Booksellers (ILAB), the three-day event is the world’s largest antiquarian book fair with nearly 200 booksellers from the United States and around the globe. The annual Book Fair features a rich selection of books, manuscripts, maps and other printed materials, including incunabula; literature from all centuries and nationalities; fine bindings; children's and illustrated books; ephemera; and antiquarian books on dozens of topics.

This year’s Book Fair will include highlights from the Special Collections of the F. W. Olin Library at Mills College. This exhibition will feature approximately forty books and manuscripts. Several of the collections that will be highlighted include the Darius Milhaud Collection, the Albert M. Bender Papers, the Jane Bourne Parton Collection of Books on Dance, the Bookbinding Collection, the Early Printed Books Collection, the Patti Smith Collection, and the Fine Press and Artists’ Book Collection.

The Book Fair’s schedule will also include the following:

Sunday, February 8: 11:30 am - 12:15 pm: Seminar: Book Collecting 101 – Learn from the experts how to create a strategy for collecting books, as well as how to spot a “first edition,” judge a book’s condition, and learn bookish terms and jargon.

12:15 - 1:00 pm: Seminar: What’s This Book Worth? – Experienced ABAA members will discuss the primary factors that give books commercial and monetary value, as well as strategies for appraising and selling books.

1:00 - 2:30 pm: Seminar: Discovery Day – This is the public’s chance to discover if those old books gathering dust are worth something. The public will receive free, expert oral appraisals on up to three books.

1:30-2:30 pm: Talk: Jack London, Photographer Presented by Sara S. "Sue" Hodson Jack London (1876-1916), still one of the most widely read American writers in the world, is known for stories and novels, as well as his own adventures as a sailor, Klondike gold-seeker, and rancher. Far less well known is London's work as a photographer, embodied in 4,000 negatives housed with the California Department of Parks and Recreation and 12,000 photographs in the Huntington Library. London's vivid, sensitive photographs capture the homeless of Great Britain in 1902; battle images and portraits of freezing

Korean refugees during the 1904 Russo- Japanese War, which London covered for the Hearst Syndicate; some of the first photos of the 1906 San Francisco Earthquake, again for Hearst; the diverse people and places of the Hawaiian Islands and the South Seas photographed on the voyage of his sailboat, in 1911. Many of the images appeared in his newspaper and magazine stories and in his books The People of the Abyss (1903) and The Cruise of the Snark (1911), but most have been seen by very few people and have never appeared in print.

Sue Hodson has overseen the Huntington's London archive for thirty years and has co-edited a volume of his photographs with Jeanne Campbell Reesman and Philip Adam, published by the University of Georgia Press in the autumn of 2010. She will present a lecture illustrated with selections from London's photographic works.

Immediately following the Sunday lecture, autographed copies of Jack LondonPhotographer, co-authored by Sue Hodson will be available for $49.99. Please contact James Bryant at carpediem@pacbell.net or visit Carpe Diem Fine Books at booth 706 for more details. All sales will benefit the ABAA Benevolent Fund.

The Book Fair’s new venue in downtown Oakland is an added convenience for bibliophiles. The Oakland Marriott City Center is just steps away from the 12th Street BART Station, making it easily accessible to attendees from San Francisco and all over the East Bay. Out-of-town visitors will appreciate staying onsite at the Marriott, plus fair visitors arriving at both Oakland and San Francisco airports can take BART directly to the new venue.

Moreover, downtown Oakland is within easy walking distance to diverse and eclectic cuisine, hip nightspots, historic Old Oakland, museums, Lake Merritt and the waterfront at Jack London Square. In fact, Oakland was recently named by the New York Times as the number five destination to visit in the world; by Thrillist as America’s fifth most “hipster” city; and by ArtPlace America, which named Oakland one of the top art destinations in the world.