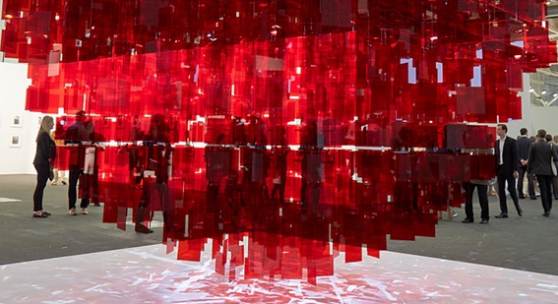 Leading galleries for Modern and historical material from across the globe will once again return to Basel this June for Art Basel's 46th edition, where Hall 2's reconfigured downstairs floorplan will create a special focus on the outstanding quality of material from 1900 to 1970, a fundamental aspect of the show. In order to further accentuate the historical focus within the show 57 galleries on the downstairs floor have changed position, creating the biggest floorplan change in Basel since 2006. This year, dozens of galleries will – exclusively or as a major part of their program – show Modern and historical material – from the classical Modern to postwar contemporary. At a time when material from the first half of the past century and after has become ever-rarer, the exhibiting galleries will again bring works of high quality to present to Art Basel's audience of connoisseur collectors.

Highlights of this year's presentations include 'Horse and Cows' by Max Ernst, executed in circa 1919, at Richard Nagy. The work is a rare oil from the Dada Movement, reflecting the disjointed structure typical of the Dadaists. The gallery will also show René Magritte's 'Renée Cordier', executed circa 1936, a major painting from the artist's exceptional 1930s oeuvre, playing on the idea of the painting within the painting in the setting of a stage play. A further highlight at the stand will be 'Woman Hiding her Face', a gouache by Egon Schiele executed in 1912. Landau Fine Art will present 'Cité Fantoche' from 1963, a monumental painting by Jean Dubuffet, marking the beginning of the artist's transformation from the Paris Circus paintings to the L'Hourloupe, two of the most important cycles in his oeuvre. Also on display at the booth will be Henry Moore's 'Family Group', an exceptional bronze from 1947; and 'Les Dormeurs' by Pablo Picasso from 1965.

'Tête de Diego au col roulé', from circa 1951, by Alberto Giacometti will be presented by Dominique Lévy Gallery. The painted bronze sculpture is among the earliest of the series of male heads and busts that were created during the 1950s and became the general model for many works that followed, whose models were almost exclusively family or very close friends.

Highlights at Galerie Gmurzynska's booth will include 'F125' by Yves Klein from 1961. At two meters wide, the work presents one of the largest and rarest of Klein's so-called Fire Paintings, which he created with the help of industrial gas burners, pushing the boundaries of painting's traditional techniques and creative tools. The work will be shown alongside Joan Miró's 'Painting (The Circus Horse)' from 1925, which marks the beginning of Miró's radical surrealist-inflected Dream Paintings sequence, which led to the young artist's breakthrough in the same year and his subsequent rise to become one of the Parisian avant-garde's definitive protagonists. Also on display at Galerie Gmurzynska will be 'Sans Titre' from 1966 by Wifredo Lam. The enigmatic canvas, in a subdued palette of petrol greys punctuated by yellow and red biomorphic shapes, is representative of Lam's mature work synthesizing surrealist and abstract compositional elements with the visual vernaculars of his Afro-Cuban heritage.

With 'Elza Temary' from 1926-1927, Galerie Michael Haas will present a rare example of a nude portrait in Oskar Kokoschka's oeuvre. Further highlights will include the monumental painting 'Two Women' by George Grosz from 1929 and Francis Picabia's 'Le négateur du hasard' from 1946, placing the artist between the poles of figuration and abstraction.
Mitchell-Innes & Nash will present Pablo Picasso's collage 'Verre et Carte à Jouer' from 1914, an important example of Cubism. Also on display at the booth will be 'Rhizome' from 1970 by British sculptor Anthony Caro. The large-scale painted steel sculpture evidences many of the principal concerns of the artist's practice: engagement with form in space, dialogue between sculpture and architecture, and creation of new, abstract analogies for the human figure and landscape.
Moeller Fine Art will feature on their stand as a highlight 'Nature morte (Profil orange)' by Fernand Léger. The painting belongs to a series of still lifes, created in 1928, in which Léger arranged planar, Surrealistic forms – a key, a human face in profile – in layered compositions. 'Nature morte (Profil orange)', a large format oil, is a masterful example in this series and has never before been on the market.

Chicago's Richard Gray Gallery will display Marc Chagall’s exemplary oil on canvas 'Self Portrait' of 1947. Acquired by New York collectors Bernard and Rebecca Reis in the years prior to 1963, the painting hung in the Reis residence for decades and has remained in the family since. The work epitomizes the complex social, political and psychological dynamics of the post-war period and more specifically, the loss and transition that the artist himself experienced at this time. Richard Gray Gallery will also present a rare and important work in bronze by Raymond Duchamp-Villon titled 'Tête de Cheval' (1914, cast circa 1950). The present example is one of only two that remain in private hands with casts located in prominent museum collections across Europe and the United States, such as the Centre Pompidou, Hirshhorn Museum and Philadelphia Museum of Art.