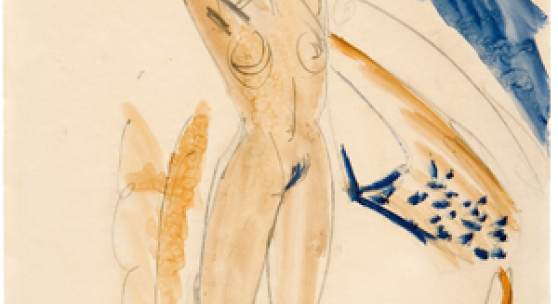 Timed to coincide with New York’s major January art-buying events, including the Old Master auctions and The Winter Antiques Show, over the past decade MASTER DRAWINGS NEW YORK has given top dealers from the US as well as the UK, France, Germany, Spain and Italy an opportunity to show their newest acquisitions to the largest assembly of drawings scholars and patrons to gather in New York each year.

Originally conceived as an annual walk-through, MASTER DRAWINGS NEW YORK has grown into a ‘must see’ event, receiving strong support as its range and influence has grown each year. Each exhibition is hosted by an expert specialist and many works on offer are newly discovered or have not been seen on the market in decades, if at all.
Critics applaud the fact that the most respected drawings dealers show important pencil, pen and ink and chalk, pastel and charcoal drawings, as well as oil on paper sketches and watercolours from the 16th through the 21st centuries.

New exhibitors in 2016 include Allan Stone Projects, a New York gallery founded in 1960 that has enjoyed sustained success mixing established artists with emerging and mid-career artists. Its exhibition is titled “Process and Presence: Mastery in Drawing” and includes figurative, landscape, still life and abstract works by prominent artists such as Arshile Gorky, Willem de Kooning, Wayne Thiebaud, Franz Kline, and Gaston Lachaise. All of the works on view are from the prodigious Allan Stone Collection. Stone (1932-2006), the New York dealer for Wayne Thiebaud for over forty years, was the leading authority on Abstract Expressionism and a passionate collector of Abstract Expressionist, Contemporary, tribal and folk art. Thiebaud’s Farm Pond (Study) c1967 has an extensive museum exhibition history and is being offered for the first time since it was acquired by the Allan Stone Gallery. Pierre Puvis de Chavannes Torse nu (Nude) from 1887 is another pastel on paper that relates closely the figures in the artist’s 1891 mural, l’Ėté (Cleveland Museum of Art). De Chavannes’s style defies easy categorization as it borrows from Neoclassical, French Realism, and Pointillist techniques.

The 130-year old Kraushaar Galleries, a highly recognized fine art source for important American art of the first half of the 20th century, as well as selected contemporary works, will be a new exhibitor at MASTER DRAWINGS week this year. Katherine Degn says Kraushaar will be featuring works by Marsden Hartley as well as Dorothy Dehner, among several important American artists. Kraushaar Galleries has a long history of exhibiting works on paper. Early shows included prints by European artists, which then expanded to include drawings and watercolors by Seurat, Picasso, Manet and Redon, among others. By the second decade of the 20th century the gallery was becoming increasingly American with watercolor and drawing exhibitions by the contemporaries Maurice Prendergast, John Sloan, William Glackens, Gifford Beal Charles Demuth, William and Marguerite Zorach and Guy Pène du Bois. Its commitment to works on paper continues with recent shows by younger artists such as Catherine Drabkin and Lee Walton while continuing its commitment to historical material. Other recent exhibitions include The Creative Process, 1930 – 1950; and Figuratively Considered – Works on Paper by Selected Artists Who Participated in the 1913 “International Exhibition of Modern Art.”

Degn says, “Dorothy Dehner drawings from the later 1940s and early 1950s are a rarely seen. They explore the personal and experimental yet vital and bold nature of her early years as an artist. Dehner’s visual vocabulary has diverse influences ranging from her experience as a serious dancer to the freedom and personal autonomy of the emerging abstract movement. This was further reinforced by her exposure to the European avant-garde during a 1925 trip to Paris, her study with Jan Matulka, and her friendship with John Graham. These sources combined to produce works that fuse aspects of cubism, surrealist abstraction and gestural elements. This drawing, made during the last years of her marriage to David Smith, documents both the love and the marital struggles in symbolic and at times surreal iconography.”