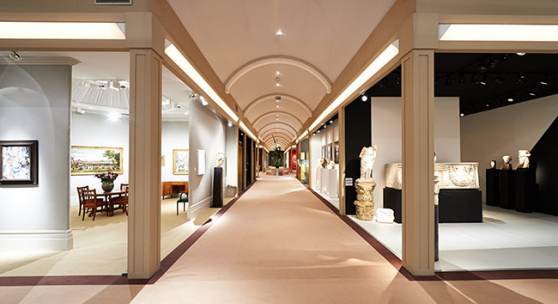 Exhibitors announced for the 8th edition of Masterpiece London alongside new space ‘MASTERPIECE PRESENTS’ Masterpiece London sponsored by the Royal Bank of Canada, announces the exhibitors joining the 2017 edition of the fair, which runs from 29 June - 5 July at the Royal Hospital Chelsea. Bringing together 150 galleries and specialists, Masterpiece launched in 2010 with a unique focus on cross-collecting. Over the past seven years it has established itself as one of the leading international art fairs, attracting approximately 40,000 visitors. Exceptional works offered for sale span Impressionist and modern art, post-war and contemporary art, master paintings from 15th to 18th century, modern and contemporary design, decorative arts, furniture, photography, ethnographic and folk art, antiquities, ceramics, silver, rare books and jewelry.

Librairie Camille Sourget will further the fair’s expertise on rare books and illuminated manuscripts, as championed by returning exhibitors Peter Harrington and Les Enluminures; photography will be presented by Bernheimer Fine Art, Peter Fetterman and Sundaram Tagore; ceramics of all periods will be presented by EH Manners, John Whitehead, Adrian Sassoon and Michele Beiny Inc; rare silver will be shown at Koopman Rare Art, N&I Franklin and The Silver Fund; antique and ancient Asian works can be acquired from Gregg Baker, Amir Mohtashemi and David Aaron – who will also show a selection of classical antiquities.

Masterpiece continues to be a destination for collectors of intricate jewellery works. Unique contemporary pieces can be purchased from Wallace Chan, Van Cleef & Arpels, BoghossÍan and Hemmerle and a selection of antique jewellery, with pieces by Cartier, Boucheron, JAR and Fabergé, can be found at Wartski, Symbolic & Chase, Verdura, Hancocks and S.J. Phillips.

Philip Hewat-Jaboor, Chairman of Masterpiece London said: ‘We are pleased to welcome so many world- renowned exhibitors this year and we look forward to another outstanding edition of Masterpiece London, where galleries will represent the very best in their fields across categories. This year the fair will launch ‘MASTERPIECE PRESENTS’, an annual entrance installation project. We are delighted to introduce this new initiative with a large installation by renowned Chilean artist Iván Navarro.’

Tony Johnson, Head of Sales and Relationship Management, RBC Wealth Management, said ‘It is our pleasure to continue as the Principal Sponsor of Masterpiece London. The fair has grown a large and dedicated network of collectors, museum professionals and galleries for the past 8 years, confirming its position as one of the world’s leading art fairs.’