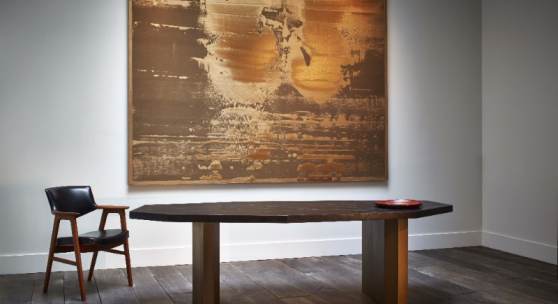 LECLAIREUR PRESENTS WORKS BY PIERRE BONNEFILLE, NINO CALOS, RONALD MALLORY, TANGENT & VON PELT AT PAD LONDON 2016
Since 1981, LECLAIREUR has worked to bring the avant garde to a larger audience, combining furniture and design objects with fashion and art throughout their Paris retail spaces.

Offering a mix of modern, highly curated and inventive environments, this unique retail experience has solidified LECLAIREUR's passion for design, the designers and craftspeople behind the work. Committed to putting the spotlight on this essential ingredient in LECLAIREUR's global vision, founders Armand and Martine Hadida have curated a selection of pieces to be shown on a global stage.

After a successful first show at PAD in Paris earlier this year, LECLAIREUR returns to the fair in London this month presenting a robust selection of designers including: Pierre Bonnefille, Nino Calos, Ronald Mallery, Tangent and Von Pelt, .

PIERRE BONNEFILLE
Pierre Bonnefille explores the resonances and vibrations of bronze. Far removed from traditional bronze works and moldings, Bonnefille uses only a powder form of the material that he transforms with his particular style into unique pieces. The material ends up as suspended on a metal mesh, revealing landscapes, watery reflections and silky traces.

In this new exploratory research, the bronze material stretches, becomes liquid and freezes into evanescent patterns on huge abstract canvases -- an abstraction which ultimately invites the viewer to project his own imagination onto the work, driven by the energy of the dichotomy between a subtle flutter of forms and the apparent strength of the pictorial gesture.

LECLAIREUR will also present furniture pieces by Bonnefille alongside his bronze works at PAD London. The inspiration for this new furniture collection came from Bonnefille's discovery of stones collected from old African copper mines which sparked the artists' desire to probe for the treasures within the earth’s crust. Thus, this new set of furniture, objects and paintings with unique forms, structures, colors and finishes arose from the diversity and the refined forms of these found ore fragments.

NINO CALOS
Nino Calos started making optical boxes in Milan in 1949.T In 1956 he moved to Paris, where he met Frank Malina, with whom he helped develop lumio-kinetic work. For one of the first times in the 20th century, science and technology gave birth to artistic expression. Calos’ works blend light with movement and represent geometrical forms that seek to evoke the cosmos, whose changes and colors reflect a variety of emotions of the artist.

RONALD MALLORY
Ronald Mallory created his first kinetic mercury pictures in 1965 after buying a small vial of mercury on Canal Street in New York. Mallory, who had studied architecture in Florida and worked in Rio de Janeiro for Oscar Niemeyer and Roberto Burle Marx, was pouring paint on canvas and looking for a new direction. He admired artists using the process, such as Morris Louis and Paul Jenkins. Already he had started to pour polyurethane into boxes backed with light to create depth in his work. Burle Marx suggested Mallory abandon architecture to concentrate on art, a recommendation he followed by moving to Paris in the 1950s. Since then Mallory's work has been exhibited around the world including at MoMA and the Whitney. Recently Mallory’s mercury work has gained new attention, thanks to a resurgence of interest in the pioneers of kinetic art.

TANGENT
Tangent is a London-based design and invention brand established in 2015, founded and directed by Hideki Yoshimoto. The brand explores and proposes unique ideas which bring the latest technology to people's lives. Its approach is, however, not to impose technology for its own sake. Instead, by interweaving technology with design at the most sophisticated level, Tangent promises its customers a wholly novel yet somehow familiar experience.

For PAD London 2016, LECLAIREUR presents Tangent's Kihou table. Kihou is a spectacular lighting piece in which air bubbles, illuminated by LEDs, rise through a clear viscous liquid to beak the dark silicon oil surface of the table. The bubbles appear at random to begin with and then slowly repeats a pattern that mimics the synchronisation seen in nature, such as in a swarm of fireflies.

VON PELT
VON PELT is a group of designers and creatives, led by creative director Desiree Mejer, whose members provenance, their crafts and talents are rich and varied.

Made in Berlin, Germany in 2016 for LECLAIREUR. For PAD London 2016, LECLAIREUR with showcase the “Meteorites” series, a fantasy project based on natures jewels, but aided by the human artistic hand, making Nature “better” than Nature itself.