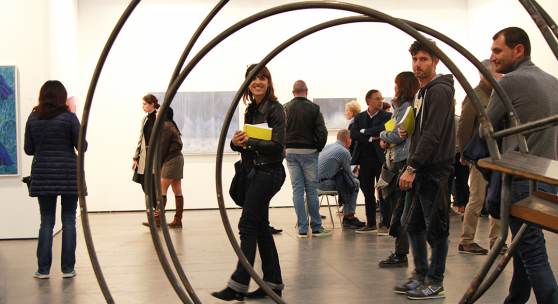 ArtVerona defines the guidelines of the 12th edition, scheduled to take place from the 14th to the 17th of October 2016 at Veronafiere, with an increasingly refined selection of galleries and an even closer attention to the world of collecting, thanks to dedicated initiatives and a tailor-made VIP program me.

Under the artistic direction of Andrea Bruciati and on the strength of the partnership with ANGAMC – Associazione Nazionale Gallerie d’Arte Moderna e Contemporanea (National Association of Modern and Contemporary Art Galleries), the event, acknowledged as one of the most lively and innovative in the sector, concentrates its actions on attention to and care of its main interlocutors, exhibitors and collectors. This year, the art critic Antonio Grulli, joins the staff, overseeing relations with collectors, bringing art lovers closer, with a curatorial approach, making contact primarily with the young generations and Italian organisations. The talks programme too, curated by Adriana Polveroni, focuses on scenarios, perspectives and passions which lie behind the birth of a collection.

The combination of reason and sentiment that moves the collector is at the centre of the cultural programme in town, inspired this year by Wolfgang Amadeus Mozart, an ever-present figure in collective thought and source of inspiration for contemporary artists. Inside the walls of Castelvecchio museum, The magic flute, an exhibition curated by Andrea Bruciati, proposes 16 works from 16 important Italian collections, communicating with the spaces and exhibition itineraries designed by Carlo Scarpa. The investigation is completed by Roberto Pugliese | La finta semplice at Museo degli Affreschi, Hermann Nitsch and the Theatre at Museo AMO Arena Museo Opera – Palazzo Forti, Raffaella Formenti | Note in DO lenti at Piazza dei Signori, Così fan tutte, ossia la scuola degli amanti, videoart festival at Protomoteca della Biblioteca Civica, R comme résistance. Re minore K626 at Cantina di Soave, Borgo Rocca Sveva (Vr). With this edition, the fair strengths communication between modern and contemporary, undertaken right from the start, an osmosis reiterated also through experimental formats, which have revealed figures of the art system who have become operational on an international scale.

This year, 120 galleries have chosen ArtVerona to consolidate and weave new relations with collectors, critics, journalists, curators and directors of museums, the latter are also the protagonists of the fortunate format Level 0. Alongside the Modern and Contemporary Section and the Raw Zone, an area hosting 12 monographic projects, comes Tangram, a dialectic section which envisages communication between the parties involved, an opportunity conceived to support the growth of young research galleries, in which the fair is an active player. Furthermore, 16 independent spaces, selected by Cristiano Seganfreddo, look at the theme of sharing (sharing economy/sharing art) and 18 trade magazines represent the world of specialised publishing, with a renewed layout by Moroso, which has been working with ArtVerona for years. The arrival of Catterina Seia, deputy chairman of the Fitzcarraldo Foundation, and Mauro De Iorio, collector, in the Directing Committee of ArtVerona, with the presence of Giorgio Fasol, Michele Furlanetto, Salvatore Mirabile, Patrizia Moroso and Cristiano Seganfreddo, confirms the growth of ArtVerona. An event which has established itself as an economic and cultural hub, and finds one of its most specific features in the relationship between art and enterprise, with new formats like Open Source and Alchimie Culturali.