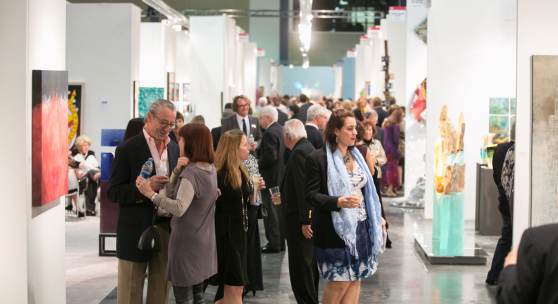 Celebrating its 20th Anniversary edition, ArtPalmBeach will pay tribute to and host a special exhibition of works by Spanish artist and sculptor Manolo Valdes, exhibited by the Opera Gallery. One of the most widely exhibited living artists, Valdes has been exhibited in over eighty-five and collected in forty major museums.

Manolo Valdes, internationally known for his skills and capacities in an out-of-the way technique. Born in Valencia, Spain, this artist, painter, sculptor and printmaker started his career in his native country with the artistic group, Equipo Cronica. In collaboration with Rafael Solves and Juan Antonia Toledo, this group became a Pop Art movement that led Valdes to show up in more than 60 exhibitions. He developed unique techniques from antique inspirations such as Francisco Goya, Picasso and Diego Velazquez. The Valencian artist creates a language of his own to establish variations on the same subject, but with new patterns throughout the use of matter in the search of textures. It is possible to believe that Valdés, recreated art inspired by some of the most representative icons of art history. In 1982, the artist develops a deeper accent in art with the use of collage and paper as a constructive sense as immaterial. In an era dominated by informal or expressionist abstraction and criticism, he launches an enormous personal figuration. A figurative realism promising a readability that abstract Expressionism did not want for painting, although at bottom it offers a sterile figuration and especially torn in its own plot, in its canvas.

In 1999 his sculpture career begins with a Bilbao project and another one on the Lady of Elche in Valencia. A large sketch that was placed at the beginning of 2002 in New York. followed by the next year, the “Menina” sculpture was installed in the roundabout of the Boulevard Salvador Allende in Madrid, Spain. His daring techniques involved Valdes not only in the art world, but also in the everyday life, cultural and even political. His work made him recipient of multiple awards around the world like Butterflies, Reina Mariana, Dama II, Caballero V among others.

His talent allowed him to receive multiple awards throughout time. In 1984, he received the Alfons Roig Award from Valencia and the National Fine Arts Award. In 1985 he was awarded the National Medal of Painting in Spain. In 1986 he obtained the medal of the Biennial at the International Festival of Plastic Arts in Baghdad (Iraq). In 1993 he received the Decoration of the Order of Andrés Bello in the Band of Honor of the Republic of Venezuela, which the sculptor Eduardo Chillida received the previous year. In 1999 he was elected Spanish representative, along with Esther Ferrer, at the 48th edition of the Venice Biennale. When you look at his work, you can think of Valdes as an art historian, a lover of paint and sculpture, or at times as a data collector. His work not only expresses memorization of other works in simple appropriation of property. His work is a presentation of stories that have already been painted in concrete and sensitive elements that Valdes learned to create and continuous to do so. His inspiration demonstrates in his work, allowing the public to look at the collections as if the past was back and vivid.