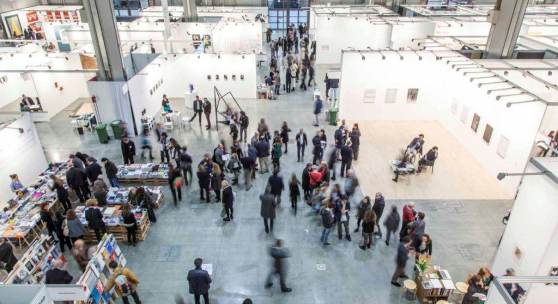 Milan, 29 June 2016 – The 22nd miart, Milan’s international fair of modern and contemporary art, will be held at the pavilions of Fieramilanocity from 31 March to 2 April 2017. After the growing success of the past years, with Alessandro Rabottini as new Artistic Director, miart 2017 announces a new team of professionals, new members of the selection committee and a project confirming the event’s role as a leader in Italy and fully a part of an international scenario. “We are ready to organize and welcome the next miart, a solidly established and growing event that, once again, will evolve under the banner of culture and the promotion of modern and contemporary art,” said Corrado Peraboni, CEO of Fiera Milano. “Miart is the only event in Italy that can bring together the most important Italian and international galleries, the most interesting works and the expertise of leading professionals. We will support it because it is the only point of excellence for those who love and collect artwork, and we will support its values with the institutions that believe in events poised to bring prestige to Milan’s urban area and to our country.”

“I am happy to announce the new project for miart 2017 that will make the most of the work done so far, expanding content and parameters,” said Alessandro Rabottini, the fair’s new Artistic Director. “Along with the numerous professionals and curators comprising the miart 2017 team, we have conceived of a fair that looks at the various aspects of the art market, and that can offer our public a broad spectrum of artistic production, from the latest generations to the masterpieces of the last century. In this new guise, miart is consolidating its structure and establishing an ever-stronger dialogue with collectors, galleries and institutions.” Miart is a fair that, like the city hosting it, engages in an intense dialogue between modern and contemporary art and design, experimentation and post-war masters. The main sections – Emergent, First Step, Established Contemporary and Established Masters – have been confirmed as the bearing structure of the upcoming event, proving the breadth of the chronological offering characterizing miart, from the art of the most recent generations to the masters of the last century. This concept of consolidation is reflected by the entry of the team of Alberto Salvadori – who curated the Decades section in 2016 – appointed to curate the Masters section devoted to artistic production from the early 1900s up to 2000. Miart also welcomes Oda Albera, who headed the Galleria Massimo De Carlo at the Milan venue for ten years, in the new role of Exhibitors Liaison and Special Projects.

Miart 2017 has expanded one of its linchpins – the dialogue between historical positions and recent artistic experiences – by redefining and expanding the concept of its central section. The new section entitled Generations – strictly by invitation – marks a development of the previous THENnow section: the comparison will be between artists from different generations, regardless of the contrast between a historic artist and a contemporary one. Nicola Lees (independent curator based in London, previously Senior Curator of the Public Programme at the Serpentine Gallery and curator of the Frieze Projects in London) and Douglas Fogle (writer and independent curator based in Los Angeles, previously curator at the Walker Art Center in Minneapolis [1994–2005] and at the Carnegie Museum of Art in Pittsburgh [2005–2009], and Vice Director at the Hammer Museum in Los Angeles [2009–2012]) have been appointed to curate the Generations section. On Demand has also been added. This is a cross-cutting section with a brand-new concept, encouraging galleries to exhibit context-based art: site-specific works such as installations and wall paintings, projects to be completed, commissions, performances and so on. We are talking about works that, in order to exist, must be “activated” by those who own them, thus underscoring that the very act of collecting is a form of care, planning and responsibility.