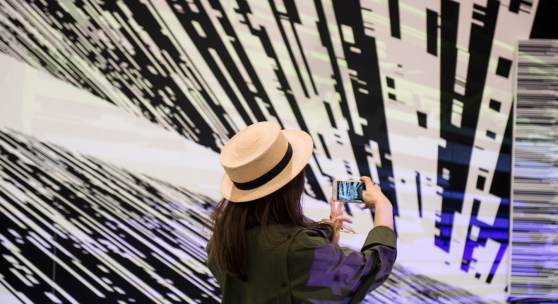 The fifth edition of Art Basel’s show in Hong Kong closed today, Saturday, March 25, 2017, with strong sales recorded across all levels of the market, demonstrating continued demand for high-quality works by the world’s leading international collectors and institutions. Attendance at this year’s show, whose Lead Partner is UBS, rose to nearly 80,000 – due to the introduction of evening ticket sales and improved crowd control measures – and attracted leading members of the international art world. Many observers felt that this edition had built on the show's strong history to attain new levels – Art Basel in Hong Kong now not only stands as the premier fair in Asia, but also as one of the leading fairs worldwide.

The 2017 edition featured 242 premier galleries from 34 countries, presenting contemporary and Modern art from around the world. Highlighting Art Basel’s commitment to the region, about half of the participating galleries have exhibition spaces in the Asia-Pacific region. Alongside many long-term exhibitors, 29 galleries took part for the first time including 10 new galleries from Asia: A+ Contemporary, Bank, C-Space and Hive Center for Contemporary Art from Mainland China; imura art gallery and The Third Gallery Aya from Japan; Jhaveri Contemporary from India; Kwai Fung Hin Art Gallery from Hong Kong, Mind Set Art Center from Taiwan and The Third Line from Dubai; 10 new galleries from Europe including: Alfonso Artiaco and Thomas Brambilla from Italy; Galerie Buchholz, Dittrich & Schlechtriem, Kadel Willborn and König Galerie from Germany; High Art and mor charpentier from France, Project Native Informant and Waddington Custot from the United Kingdom; nine new galleries from the Americas including: Aicon Gallery, Clearing, Luxembourg & Dayan, Sundaram Tagore Gallery and Various Small Fires from the United States; Bergamin & Gomide, Athena Contemporânea, Fortes D’Aloia & Gabriel from Brazil and kurimanzutto from Mexico.

Galleries who participated in the show spoke highly of their experience and success at this year’s show.

‘This has been another important year at Art Basel in Hong Kong. We had significant sales with a strong response from Asian collectors, including those from Korea, Mainland China, Hong Kong and Japan. The fair and Hong Kong’s art scene are certainly gaining momentum, and we look forward to the opening of our Hong Kong gallery in early 2018 in the H Queen's building.’ David Zwirner, Founder, David Zwirner, New York, London

‘We are delighted with the level of sales at this year's Art Basel in Hong Kong. A major piece by Theaster Gates sold to a private museum in China and will be on public view. Other notable sales include works by Georg Baselitz, Imi Knoebel, Josiah McElheny, Larry Bell, Jannis Kounellis, Gabriel Orozco, Antony Gormley and Tracey Emin. Mona Hatoum’s work ‘Kapan Iki’ has been sold to an important museum in the region.’ Daniela Gareh, Director, White Cube, London, Hong Kong

‘Art Basel in Hong Kong was a great success this year, with spectacular crowds and enthusiastic new collectors from all over Southeast Asia – our booth nearly sold out by the end of the second day. We were especially impressed by the private museums and foundations whose directors were out in force at the fair.’ Marc Glimcher, President, Pace, New York, London, Menlo Park, Beijing, Hong Kong, Paris, Palo Alto, Seoul

‘It has been a remarkable fair for us. We are thrilled that our artists’ work across all sectors – Galleries, Encounters and the newly launched Kabinett – have been very well received. Art Basel is the perfect international platform to promote the long history of Korean art to an international audience.’ Hyun-Sook Lee, Founder and Chairwoman, Kukje Gallery / Tina Kim Gallery, Seoul, New York

‘Art Basel in Hong Kong keeps getting better and better. The fair always brings people together. We have been reconnecting with collectors, curators and museum directors from around the world, and we have also met many new faces from Asia and beyond.’ Pearl Lam, Founder, Pearl Lam Galleries, Shanghai, Hong Kong, Singapore

‘The fair continues to build on the success of previous editions. Art Basel in Hong Kong is one of the few fairs where we expect to do business throughout the week, not just on the opening day, and this year was no different, with a dozen sales across our roster on day one and good sales on subsequent days.’ Glenn Scott Wright, Director, Victoria Miro, London