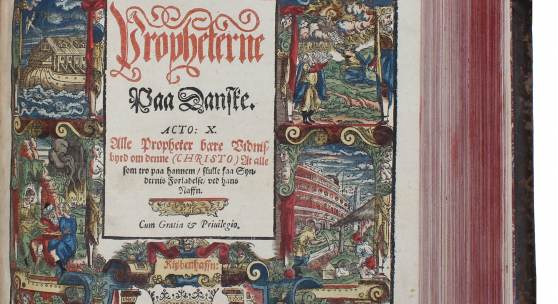 We are specialized in science, philosophy, economics, natural history, and history of ideas in general, in the period from the 15th to the 20th century. Below are short-title descriptions of the books that we are showing at the Scandinavian Antiquarian Book Fair in Copenhagen 2017, in The Round Tower.

THE STANDARD INTRODUCTION TO ASTROLOGY IN WESTERN EUROPE ALCHABITIUS
Libellus isagogicus...
1482. Scarce first Ratdolt-edition and second edition overall of the principal surviving work by the great Arab astronomer, astrologer and geometrician Al-Quabisi (fl. ca. 950). The work, which is an introduction to the fundamental principles of astrology, might not have been original in its contents, but its influence was profound and throughout centuries, it was highly valued as a textbook. The work was written in the 10th century and quickly became the standard introduction to astrology in Western Europe. With the emerging universities, Alqaubisi's "Introduction" became the most widely read book on astronomy in the middle ages. "By the mid twelfth century there was a shift away from the Cathedral schools to the emerging universities... With the establishment of curricula in the Faculty of Arts, and set texts for astronomy, al-Quabisi's text became the astrological text that was most commonly included in the syllabus." DKK 185,000 / EUR 24,900

"ONE OF THE MOST BRILLIANT ACHIEVEMENTS IN SCIENCE" AMPÈRE, ANDRÉ-MARIE.
Théorie des Phénomènes électro-dynamiques...
1826. Scarce first edition in the very scarce first separate edition of "one of the most celebrated memoirs in the history of natural philosophy" (Whittaker), unifying electricity and magnetism. The papers published here, which Ampère had read to the Academy during the years 1820-25, appeared prior to the publication in the Memoirs of the Academy. DKK 115,000 / EUR 15,500

THE GREATEST REVOLUTION IN THE HISTORY OF THEATRE AND BALLET [BALLETS RUSSES] - DE BRUNOFFF, DIAGHILEV, APOLLINAIRE, COCTEU, BAKST, etc.
Collection des plus beaux numéros de Comoedia illustré et des programmes consacrés au Ballets & Galas Russes.. (1909-21). Very rare limited original edition of this splendid production, which constitutes a collection of the most important, most influential, and most beatiful parts of the original Ballets Russes-publications, together with explanatory forewords. ALL THE PROGRAMMES ARE THE ORIGINAL PRINTINGS, collected and bound here in this special compilation. This production vividly documents the famous ballet company that premiered such groundbreking productions as Igor Stravinsky's Firebird, Petrushka, Rite of Spring, Parade, etc. Among the most important of all the publications present, is the magnificent May 1917 "Théatre du Chatelet" separate publication, which constitutes one of the most important publications in the history of modern art. It is here that Apollinaire coins the term "surrealism" and thus lays the foundation for the seminal cultural movement that Bréton came to lead. Furthermore, the ballet "Parade" represents a historical collaboration between several of the leading artistic minds of the early twentieth century: Erik Satie, Jean Cocteau, Pablo Picasso, Léonide Massine, and Serge Diaghilev, and is especially famous, not only for its contents and its music, but also for its magnificent costumes designed by Picasso, the drawings of which are presented in the present publication for the first time - most famously the front cover for the "Parade"-programme, which depicts the "Costume de Chinois du ballet "Parade"/ aquarelle de Picasso", an etching with original, stunning pochoir-colouring (hand-painted by Picasso himself!). This is just one of many programmes present here. It epitomizes the importance and infuence of the magnificent "Comoedia Illustré", of which all the most important contributions are collected here, in this one stunning volume. DKK 115,000 / EUR 15,500

ONE OF THE FIRST MEDICAL PERIODICALS BARTHOLIN, THOMAS (Edt.) - STENO, NICOLAUS [NIELS STEENSEN] et al. Acta Medica & Philosophica Hafniensia.
1673-80. The very rare first edition of all five volumes - fully complete with all 62 plates - of Bartholin's groundbreaking medical journal, which constitutes the first scientific periodical in Scandinavia and one of the very first medical periodicals in the world. "The Copenhagen biologists, under the quickening influence of Thomas Bartholin, produced five volumes of transactions known as the Acta medica et philosophica Hafniensia, which is now very rare." (Hagenströmer). The most outstanding contributions are the 12 by Niels Steensen (Steno), which are all printed here for the first time. His contributions constitute important finds in the fields of The Brain, The Heart, The Muscles and General Embryology.   DKK 85,000 / EUR 11,500