Inlibris at the 2017 Sharjah Book Fair 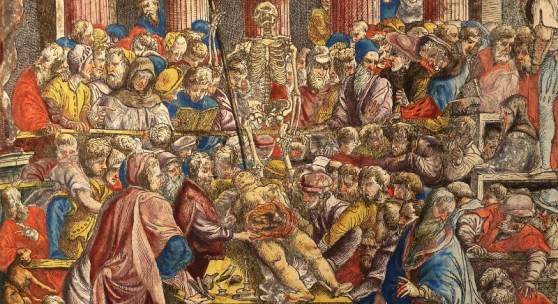 The Sharjah International Book Fair opened its gates on Wednesday, but we'll be around until Saturday the 11th, showing the 270 exquisite items that form our current catalogue (available for download here). From this, we have culled a selection of 10 rare books, manuscripts and autographs, which we have just published online as an illustrated fair list. Highlights to look out for include:

a coloured copy of Andreas Vesalius's "Fabrica" of 1543: the first edition of the book that introduced modern anatomy, owned and used by the surgeon to the Duke of Saxony;

an early illustrated edition of Ibn Sina's "Kitab al-qanun", published in Venice in 1562;
a consecutive set of the rare Gulf Administration Reports published by the British Government between 1875 and 1882, which has been called a "mine of information on the development of the modern Gulf" - never seen in the trade;
the first printing of "Fidelio", Beethoven's only opera, inscribed by the composer and formerly in Toscanini's collection; and
Daniel Quigley's magnificent 18th century painting of the Godolphin Arabian, removed from the collection of Lord Harlech.

As every year, we are sharing our showcases with our friends from Antiquariaat Forum, Netherlands, at stand O6 in Hall 5, and we look forward to seeing some of you before the end of the fair!