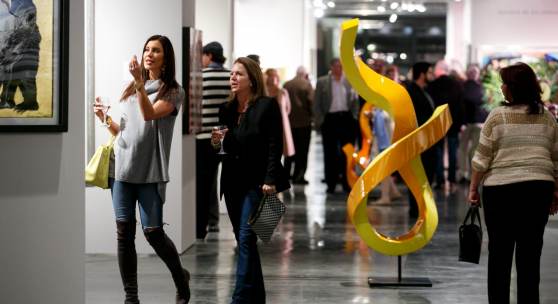 (Palm Beach FL) At this year’s 21st edition of ArtPalmBeach, Trading Boundaries Fine Art Gallery will be showcasing a stunning collection of Roger Dean’s works for fairgoers to be captivated by. The collection will feature paintings, drawings, watercolors, sketches, and prints by the artist, many of which will be seen and available for purchase by the American public for the very first time. Fair attendees can experience the Trading Boundaries exclusive at booth #420 at the Palm Beach fair. This highly anticipated exhibition will leave attendees in awe as they are treated to a look inside Dean’s wildly surreal perspective and get a first look at the artist’s buzzworthy collection of works. Roger Dean will be available for book and print signings on Jan. 20th and 21st at 3-4 pm.

Whatever the level of your artistic literacy, you’ve more than likely seen works by the revered Roger Dean at one point or another. Dean is an English artist, designer, and publisher. He is best known for his work on posters and album covers for musicians, which he began painting in the late 1960s. The famed UK artist has created album covers for bands like Led Zepplin, The Gun, Budgie Yes, Asia, Osibisa, and the Pink Floyd. Dean’s works have graced the covers of over sixty million record albums, video games, books, posters, the artist’s prized works take viewers into alternate worlds and galaxies where nature thrives and mythical creatures roam. Dean’s surreal universes are powered by his vivid use colors, futuristic architecture and a juxtaposition between the natural and the fantastical.

While Roger Dean is well known for his otherworldly creations, the acclaimed artist also boasts years of design training and is one of the most iconic designers – having designed seating for Ronnie Scott’s Jazz Club in London in the late 60s, along with his famous “Sea Urchin” chair in 1966 which has since been acquired by the Victoria & Albert Museum of London for their esteemed furniture collection. Dean’s illustrious career in the arts, entertainment and design industries prove his creative mastery of two and three-dimensional forms.