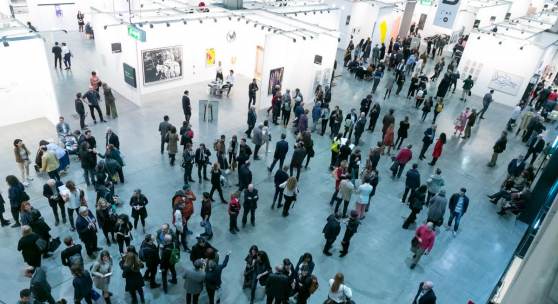 Milan, 11 July 2017 - the 23rd edition of miart, the International Fair of Modern and Contemporary Art in Milan, expands the strategy developed by Fiera Milano that has made it a reference art fair where quality and discovery coexist. The next edition will take place in the pavilions of Fieramilanocity from 13 to 15 April 2018, with VIP preview on Thursday 12 April and will again see miart at the centre of a week dedicated entirely to art. This art week will involve Milan's public and private institutions, its galleries and its non-profit spaces, organisations that make Milan an international capital of creativity.

In its second year under the artistic direction of Alessandro Rabottini, miart 2018 has announced a new team of curators, new members of the Selection Committee and a project that confirms the mix of contemporary, modern and limited edition art that is unique in Italy. Like every year, miart will be the catalyst of Milan Art Week, an intense programme of events and openings organised in partnership with Milan City Council and which brings together Pirelli HangarBicocca, Prada Foundation, Triennale, the Nicola Trussardi Foundation, the Royal Palace of Milan, Museo del Novecento ("Museum of the 20th Century"), FAI Italian Environment Fund, PAC - Contemporary Art Pavilion, GAM - Galleria d'Arte Modern, the FM Centre for Contemporary Art, the Furla Foundation and the Carriero Foundation, among others.

In the words of Alessandro Rabottini: "I am proud to present the international team of curators that is already working on miart 2018, a group of professionals who will bring to Milan that plurality of voices and points of view that characterises the project supported  by Fiera Milano. The 2018 edition strengthens the identity we have pursued over recent years, that is, the idea that the past, the present and the future of art are dimensions of creativity in a continuous and reciprocal relationship. miart attracts as vast a range of audience types as it has main areas of interest: historical art, contemporary art, emerging art and design research. And it is the breadth of views that we want to provide for our audience on the occasion of miart 2018" “miart is a fair that combines modern and contemporary art and design, articulating an intense dialogue between the post-war masters and emerging talents– declares Lorenzo CaprioPresidentof FieraMilano-withitsmainsections-EstablishedContemporary, Established Masters and Emergent - miart is the Italian fair that presents the public with the broadest chronological offering from the art of the beginning of the last century to the works of recent generations through a range carefully selected from galleries operating in both primary and secondary markets” Along with a careful selection of prestigious international art galleries, miart places particular emphasis on historic artists in its Masters and Decades sections. Both sections, curated for the second year by Alberto Salvadori, focus on the presentation of seminal works by post-war masters alongside the rediscovery of artists that the market is now bringing to the attention of collectors. At a time of huge interest in post-war Italian art, miart is a unique event for the historical market, both for the quality of the artworks and for the rigour of its exhibition projects.