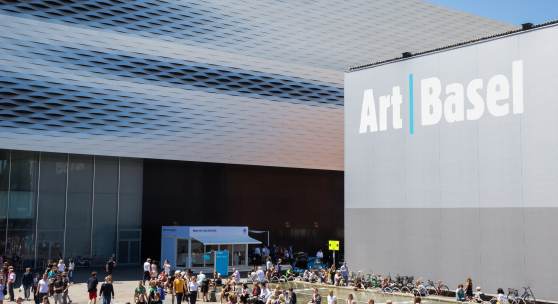 Art Basel is pleased to announce the list of galleries participating in the 2018 edition of the show in Basel, Switzerland. This year, 293 premier galleries, drawn from 35 countries across Europe, North and South America, Asia and Africa will present Modern and contemporary works by around 4,000 artists. The show welcomes 17 galleries that join the fair for the first time, further rejuvenating the show and giving younger galleries the opportunity to present their program alongside today's leading established galleries. Highlights of this year's edition include ambitious projects by historical and emerging artists in Feature and Statements. Art Basel, whose Lead Partner is UBS, takes place at Messe Basel from June 14 to June 17, 2018, bringing together gallerists, artists, collectors, curators, museum directors and critics from across the globe.

Galleries, the main sector of the show, features 229 of the world’s leading galleries presenting the highest quality of painting, sculpture, drawing, installation, photography, video and digital works. With a reapplication rate of 99% for the sector, this year’s strong selection of returning exhibitors is complemented by nine galleries participating in Galleries for the first time. 47 Canal, Alexander Gray, Bergamin & Gomide, Casas Riegner, Kadel Willborn, Kate MacGarry, KOW, Mendes Wood DM and Tokyo Gallery + BTAP join the main sector of the fair having previously exhibited in Feature and Statements. These additions reflect Art Basel's efforts to steadily bring younger galleries and the next generation of Modern galleries into the main sector of the fair, where they can show the full range of their programs.

This year's Feature sector boasts a particularly ambitious selection of 32 precisely curated projects from both historical and contemporary artists. This year’s edition welcomes seven galleries exhibiting for the first time at the Basel show: Barbara Gross Galerie, Galerie Max Mayer, Richard Saltoun Gallery, Galerie Lange + Pult, Galerie Bernard Bouche, Hosfelt Gallery and Franklin Parrasch Gallery. Highlights in Feature include the presentation of works by the 2017 Turner Prize winner Lubaina Himid (b. 1954) at Hollybush Gardens, offering an insight into the artists’ experimental, playful and political approach to painting. Richard Saltoun Gallery will present six pivotal works by British artist Helen Chadwick (b. 1953 – d. 1996), whose unique and multi-disciplinary practice at the intersection of conceptual-performative art and feminist thinking, captured the zeitgeist of Britain in the 1980s. Galleria Lorcan O'Neill Roma will showcase rarely seen works by Rachel Whiteread (b. 1963), including five iconic ‘Bookshelf’ sculptures that embody her deep exploration of memory and are associated with her seminal works: ‘House’ (1993) and the ‘Vienna Holocaust Memorial’ (2000).

Monica De Cardenas will present two significant cut-out works by Alex Katz (b. 1927), from the late 1950s. Hamiltons will display a wide selection of rare and unseen photographs by Irving Penn (b. 1917 – d. 2009), which were captured in the late 1930s and early 1940s in New York and the American South. Further highlights include three significant works by Gilberto Zorio (b. 1944), a pivotal member of the Arte Povera movement, which will be on display at Galerie Pietro Spartà, while ChertLüdde will show two large inflatable sculptures by Franco Mazzucchelli (b. 1939).

A series of images of the civil wars in Lebanon and Palestine by Fouad Elkoury (b. 1952) will be on show at The Third Line, while Galerist will dedicate its booth to Nil Yalter’s (b. 1938) poetic multi-media installation ‘Le Chevalier d’Eon’ (1978), one of the first artworks from the Middle East to engage with transgender identity. Jay DeFeo's (b. 1929 – d.1989) abstract and experimental photo-based work will be presented by Hosfelt Gallery, while a new 4-channel video installation by Elizabeth Price (b. 1966) will be on display at Grimm, in which the artist constructs an abstract ghost narrative using ink and charcoal. For a full list of projects, please visit artbasel.com/basel/feature.