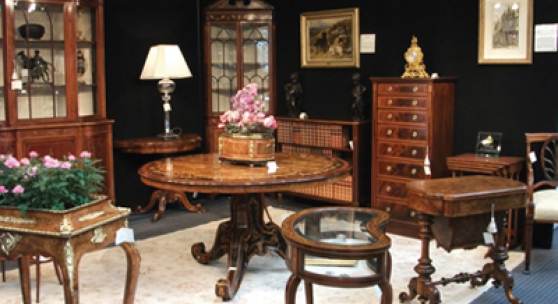 The new Penman Fair will be held in two large permanent marquees - part of the charming Royal Windsor Racecourse - from Friday, 8th to Sunday, 10th June 2018. This new event will be a relaxing day out with over 40 stands offering a sparkling variety of fine art and antiques, displaying for sale a tempting array of stylish pieces from 1650 to the present day. Some of the exhibitors at the new Fair in Windsor will be bringing items with Royal provenance or Windsor connections.

Prince Harry and Meghan Markle are expected to be given a title by the Queen and there is a high chance they will be created Duke & Duchess of Sussex. Schredds, London-based silver dealers, will be bringing a pair of skewers with shell and ring handles made in London in 1817 by Thomas Barker engraved with the initials of Augustus Frederick, Duke of Sussex (1773-1840) – the 6th son and 9th child of George III. Luke Schrager of Schredds says: “Christie's sold his silver collection in 1843 and the skewers sold to Garrards for £2 11s (at 6 shillings per Ounce) and weighed at the time- 8 Troy Ounces 10 dwt. This makes it as certain as we can be that these skewers are those in the 1843 sale and that they have only lost 1 pennyweight since that time. They carry an asking price of £2,250.”

There is another magnificent item from the same silver dealer with a potential Royal connection though – the 'Sprimont' sauceboat with a price tag of £3,800. This is a small sauceboat 12.7cm long and 10cm high. It is fully hallmarked for London 1747 but carries no maker's mark. The style is associated with the Huguenot silversmiths of the mid eighteenth century, Nicholas Sprimont. The sauce boat is identical to a pair hallmarked 1761 in the Ashmolean museum, by William Robertson of London. He is said to have followed an already established design from the mid 1740s by Paul Crespin and Nicholas Sprimont. As Robertson didn't register his first mark until 1753, this piece is unlikely to have been made by him, but most likely by Sprimont. He was a rare maker whose work, both in silver and ceramic, is strongly represented in the Royal Collection.

Drove House Antiques will be bringing several 19th century Parian items of Queen Victoria's extended Royal family including a lovely one of Prince Alfred with his pony, which the Queen must have liked so much, she had a copy of it in Osborne House, which is still there.

WR Harvey will bring a spectacular Regency Mahogany sideboard from ca 1820. The quality of the timbers used in this combined with the outstanding reeded columns and legs suggest an attribution to Gillows of Lancaster. It has until recently been in the Royal Box at Cheltenham Race Course before it was replaced in the most recent refurbishment. Generations of the Royal Family will have had meals and tea served from this and it could be a star piece in your home for £5,000. On the same stand will also be a very rare Bureau Bookcase. The extremely fine and rare Queen Anne period "Burr Mulberry" bureau bookcase attributed to John Coxed of the White Swan workshop, south of St Paul's Churchyard, London, from circa 1710 is expected to sell for £45,000.00. It featured in Country Life in 1969 in Pinto's article on 'The myth of the Mulberry Burr veneer'.

Newman Fine Art will be bringing a glorious view of Windsor Castle by Charles Frederick Allbon (1856-1926), a Landscape and coastal scene watercolourist and etcher. Other woks of nearby Thames views include two watercolours by Frederick Edward Joseph Goff (1855- 1931) - one of ‘Moulsford’ (near Streatley on Thames), the other of ‘Sonning on Thames’ - priced individually at £675. Goff was known for the painstaking detail of his work as he suffered from poor eyesight, he used a magnifying glass which explains the detail and accuracy achieved in his commonly small watercolors.

The fair will have dealers in all categories covering Old Masters, Art Deco & Nouveau to Contemporary art and everything in between. The latest exhibitor to join is Time Wise London, who will bring a huge variety of 'must have' watches, including a Vintage Vacheron Constantin wristwatch in solid 18 k yellow gold case with screw down back. Automatic movement with centre seconds, dated 1961. Always very sought after is a Vintage Rolex Oyster Precision in 9 k gold case with a very rare quartered "Chevron" dial in original condition and hallmarked 1959. A very unusual Hanhart German Luftwaffe Pilots watch of World War 2 will also be available and even retaining the original period strap.

The fair will have a huge selection of jewellery – from antique to costume jewellery, but an impressive ring fit for a princess can be found at Thomas Glover. The Art Deco Asymmetric Ruby & Diamond cocktail ring from c.1940 will most certainly impress, but can be yours for under £5,000. You will not only be able to find beautiful objects to enhance your homes, but there will also be a fine selection of glamorous jewellery and accessories for the ladies. All the stands will be vetted to ensure the best quality possible and include a good variety and balance of furniture, paintings, silver, ceramics, textiles and jewellery. There will be  

  something for every taste, whether you are a collector or someone looking to buy some great works of art to give your home a stylish touch. The Fair will be open from 10.30 am to 6 pm on Friday & Saturday and until 5pm on Sunday. Free parking is available and excellent catering on site – all you need for a summery day out! Entry is £5 per person. Royal Windsor Racecourse, Maidenhead Road, Windsor, Berkshire SL4 5EZ