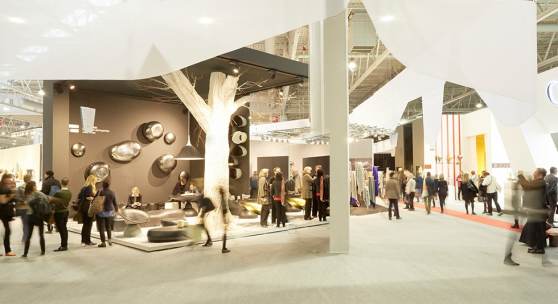 The global interior industry has grown by 2% this year. This newfound momentum was confirmed during the January 2018 MAISON&OBJET. The fair registered an increase in visitor numbers, with figures for French and international buyers markedly on the rise, and inspired visitors with a high-end offering unlike any other, both comprehensive and carefully segmented.

Non-EU Visitors and French Buyers Contribute to Soaring Traffic The January 2018 edition confirmed the upturn that began a year ago. With 89,495 visitors, the latest edition received 4% more visitors than the January 2017 fair. French buyers, whose numbers have been growing steadily for the past four editions, thronged the halls with renewed interest. The fair is also seeing increasingly more visitors hailing from outside the EU, with the highest growth rates for China, the USA and Russia.

Italy Steals the Show
MAISON&OBJET has always had a very special relationship with Italy – the country was honoured again at the January 2018 fair. The Rising Talents Awards revealed six up and coming names on the Italian design scene, each sponsored by one of six famous figures of the creative industry. Additionally, the ICE Italian Trade Promotion Agency launched a ‘Made in Italy’ label, which identified 300 companies located all around the fair. Italy remains the second largest source of exhibitors after France.

A Wave of Novelty Sweeps Across the Halls According to Philippe Brocart, Managing Director of SAFI, the company that organises MAISON&OBJET: “9 out of 10 visitors are primarily looking for new products. Other motivations include the chance to discover tomorrow’s trends and meeting new suppliers.” The leading professional event for a broad selection of quality interior products, MAISON&OBJET has made novelty a driving force. For five days, French or international retailers and specifiers discovered the new products and latest collections of some 3,000 brands from 63 countries. Almost one third of exhibitors were newcomers.

MOM (MAISON & OBJET & MORE), an online service launched just one year ago to complement the physical event, is gaining an increasingly wide audience due to its innovative concept and inspiring content. The digital platform is growing exponentially and keeping the community engaged all year round. Key Figures on MOM 2+ million visits annually 8.5 million page views, 72% of which abroad (source: AT Internet 2017) +35% members between the 1st and 2nd semesters of 2017 10+mn visit length (source AT Internet January 2018) 200+ countries represented, led by France, the USA and Italy (source MOM database January 2018)