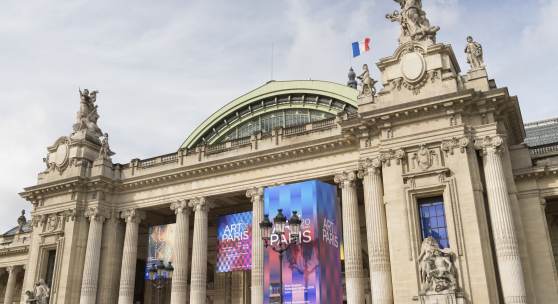 Art Paris is the place to be in Paris in spring. Favouring a thematic approach and open to all mediums, from 4th-7th April 2019, the 21st edition of the fair will bring together 150 modern and contemporary art galleries under the majestic cupola of the Grand Palais.

An identity all of its own

Art Paris has an identity all of its own. It is an international art fair that focuses on a regional exploration of European art from the post-war years to the present day, whilst placing special emphasis on the new horizons of international creation, whether from Asia, Africa, the Middle East or Latin America.

On the up and up

With 150 galleries (44 % of whom are first-time participants) compared to 143 in 2018, from 20 different countries (with for the first time Cameroun, Bulgaria and Peru), the 2019 selection also bears witness to the fair’s move upmarket with the arrival of galleries such as Art : Concept, Ceysson & Bénétière, Jérôme Poggi, Praz-Delavallade and SAGE Paris.

A Gaze at Women Artists in France

Curated by AWARE: Archives of Women Artists, Research and Exhibitions, the 2019 edition presents a critical and subjective overview of the work of women artists in France.
25 specific projects by women artists will be selected from amongst the exhibits of participating galleries. This selection is divided into four themes: Abstraction, the Feminist Avant-Garde, Image and Theatricality. AWARE has also been invited to write a critical essay that situates each artist’s work in its historical context.

AWARE was co-founded in 2014 by art historian Camille Morineau, who specialises in women artists. She is also the director of exhibitions and collections at the Monnaie de Paris. AWARE: Archives of Women Artists, Research and Exhibitions aims to produce, index and distribute information about 20th century women artists.
www.awarewomenartists.com

In 2019, Art Paris is setting out to explore Latin American art from the 1960s to the present day. Around twenty European, Asian and Latin American galleries are presenting an ensemble of 60 Argentinean, Brazilian, Chilean, Colombian, Cuban, Mexican, Peruvian and Venezuelan artists. In parallel, other projects such as a video programme, installation artworks, the presentation of works by Latin American women artists from the collection of Catherine Petitgas and conferences at the Maison de l’Amérique latine will highlight the creative effervescence that reigns on the continent.

Southern Stars: An Exploration of Latin American Art is curated by the independent exhibition curator Valentina Locatelli, who is based in Switzerland.

Ever since 2015, Art Paris has been endeavouring to encourage the presentation of monographic exhibitions throughout the fair. The 2019 edition presents a record number of forty-five solo shows, compared to thirty-six in 2018, a number that is indicative of the fair’s selection process that incites galleries to present specific, concise projects.

With the support of Barneby's.

“Promises” is a section located in the central part of the Grand Palais playing host to 14 galleries with less than six years of existence. The participating galleries may present no more than three emerging artists. The fair finances 45% of the galleries’ participation costs.

With the support of The Wall Street Journal.

With the opening of private foundations, bold new architecture, dynamic institutions and an active art market, Paris is more than ever a World art capital and a place to be. The fair’s special VIP programme, “Springtime in Paris”, illustrates the effervescence of the Parisian art scene this spring, while highlighting the Latin American presence in France.

Making contemporary art accessible to all

Art Paris is dedicated to making contemporary art accessible to the widest audience, offering some 80 guided tours of the fair as well as a number of specific tools, in particular its elaborate yet eminently practical website which presents a virtual visit of the fair and filters allowing visitors to search for works by artist, price, geographical provenance and technique...