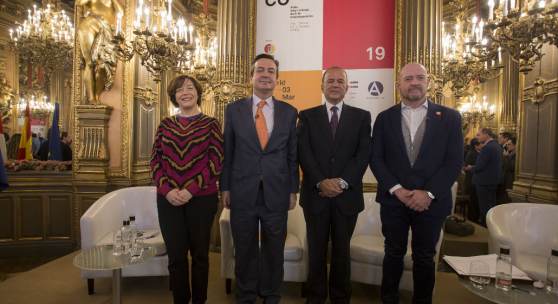 A total of 203 galleries from 31 countries are taking part, 166 of which are part of the General Programme, in addition to the curated sections: 'Peru at ARCO', with a selection of 24 artists from 15 galleries; 'Dialogues', with 13 galleries and 'Opening', with 21

About 40% of the galleries are participating with programmes focused on the presentation of one or two artists from different environments, to which 38 special projects distributed across the fair are added, underlining ARCOmadrid as a space to get to know artist' work.

The Fair consolidates its Latin American projection with the presence of Peru as the guest of honour.

From February 27 to March 3, a new edition of ARCOmadrid will be held in Madrid and organized by IFEMA, turning the Spanish capital into a major attraction for collectors, galleries, artists and art professionals from around the world. The fair, in its 38th year, continues to adjust its spaces and presentations to the needs of the galleries and interests of the curators. In addition to the Peruvian artists participating in the `Peru at ARCO` programme, galleries have chosen to present one or two artists, with an increasing contribution of special projects distributed across the fair, which will evidence the complicity and close collaboration of the galleries with the artists. All this has facilitated the participation of different architects and designers to form a more architectural fair and constitute a new format for ARCOmadrid.

ARCOmadrid 2019 will be held in Halls 7 and 9 of IFEMA with a total of 203 galleries from 31 countries, 166 of which are part of the General Programme, in addition to the curated sections: 'Peru at ARCO', with a selection of 23 artists from 15 galleries, 'Dialogues', with 13 and 'Opening', with 21. This year will once again be a benchmark for research, discovery and knowledge of new creative talents. In this respect, about 40% of the galleries are presenting projects from individual artists or those in dialogue on their stands. Similarly, 38 artist's projects are distributed across ARCOmadrid, which also confirms the galleries' commitment to presenting ambitious and risky works and projects.

In this context, Madrid in February will be an exceptional moment to celebrate collecting in Latin America with the coinciding of different projects that may be seen in the main art centres and museums of the capital. Casa de América will host the Jan Mulder collection; the Real Academia de Bellas Artes de San Fernando, the Eduardo and Mariana Hochschild collection; the Instante Fundación will exhibit a show promoted by CIFO Europa with Peruvian artists from the collection of Ella Fontanals-Cisneros, Alberto  Rebaza Torres, Armando Andrade de Lucio and Juan Carlos Verme Giannoni. Sala de Arte Santander will be hosting the Teixeira de Freitas collection, with Sala Alcalá 31 presenting Latin America in the CA2M and Fundación ARCO Collections.

In addition to these exhibitions there are others promoted by various Peruvian institutions and public bodies, including the Ministry of Culture, the Ministry of Foreign Affairs and Promperú. Under the coordination of Fietta Jarque, all will form the parallel programme 'Peru at ARCO`, as well as other events developed within the framework of the Peru Forum, organized by Miguel A. López, and with the participation of artists, historians and curators who will analyse the particularities of Peruvian contemporary art.

The quality of new galleries participating in ARCO 2019 will be one of the particular features of the next edition, which includes a total of 45 new galleries.

The main focus of the Fair, the General Programme, will consist of 166 galleries selected by the Organising Committee, 20 of which are new, including, most remarkably, Meyer Riegger, Rodeo; Timothy Taylor and Edward Tyler Nahem. In addition to these, others that have underlined their confidence in ARCOmadrid, such as Alexander and Bonin, Carlier Gebauer, Chantal Crousel, Esther Schipper, Gregor Podnar, Hauser & Wirth,König Galerie, Raffaela Cortese and Thaddaeus Ropac.

In addition, ARCOmadrid continues to support projects by individual artists and those in dialogue, once again hosting SOLO / DUO. Of the galleries taking part in the General Programme, 30 will dedicate their stand to one or two artists, including Miriam Cahn, Marcius Galan, Lia Perjovschi, Glenn Ligon and Jenny Holzer.