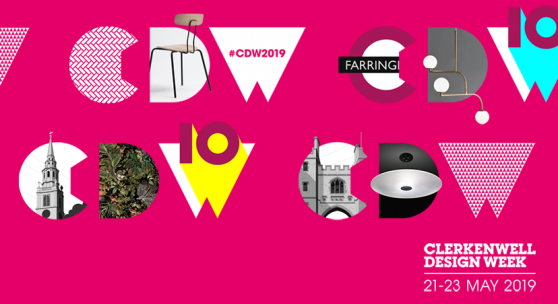 A major celebration takes place this May in Clerkenwell, one of London’s most vibrant districts as CDW 2019 marks its 10th birthday. Giant customised candle like beacons will be found throughout the area, while showrooms, practices and seven exhibition venues throw open their doors as part of this annual design week. CDW has firmly established itself as the UK’s leading independent design festival, which each year attracts the international design community to this district.

CDW’s growth has flourished over the past 10 years, working in synergy with the natural growth of Clerkenwell as an area full of creativity. For the tenth edition, expect a show full of celebration and achievement, highlighting the popularity and success of CDW.

Elliot Brook, Co-Founder and Director of Deadgood states "CDW’s success... has been its ability to create a platform for independent British Design brands to be seen and heard within the UK furniture industry. From the off, the event enabled younger companies like ourselves to pitch up alongside established industry players in order to challenge the pre conceived conceptions of what commercial furniture should look like...Our Deadgood brand is now flourishing at the very same time that CDW is becoming the internationally recognised brand that it is."

NEW GRAPHICS
To mark the 10th anniversary celebration, a new creative campaign and motion graphic has been commissioned by CDW, which features the work of design duo and brothers Cai and Kyn, who created the first ever identity for Clerkenwell Design Week back in 2010. Teaming with illustrator Matt Harrison Clough, and animator Nigel Coan, the identity playfully uses the CDW letters to celebrate Clerkenwell’s cultural landmarks (represented in the C), design products (featured in the D) and CDW’s 10th anniversary (represented in the W) through a series of 10 logos.

Cai & Kyn state “We were very excited to be invited back to work on the creative campaign for this year’s 10th edition. We’ve maintained a close relationship with the festival over the years and have had the pleasure of watching it grow into one of the world’s best design festivals. We wanted to develop the CDW acronym in an illustrative and playful way to reflect the areas diverse creativity whilst highlighting the unique elements that make Clerkenwell Design Week one of the most anticipated design festivals in the UK calendar”.

CDW PRESENTS
Each year, one of the highlights of CDW is CDW Presents showcasing commissioned site specific installations across Clerkenwell. For CDW’s 10 year anniversary, expect the most exciting street spectacles yet, including Once Upon A Time which takes inspiration from the rich and sometimes dark historical tales of Clerkenwell. For this initiative, CDW have collaborated with Chelsea College of Arts, BA Graphic Design Communication students to create a series of graphic installations inspired by the stories relating to the significant locations. The six winning entries will be selected by a judging panel including; Max Fraser, CDW Content Editor; Priya Khanchandani, ICON Editor, and David Barnett, Chelsea College of Art Course Leader, BA Graphic Design Communication. In conjunction with the project, Lansdown’s London will be hosting a number of historical walking tours during CDW exploring its past as a centre of making, from clock-makers to gin distillers. CDW will also present Decade, a dramatic trail of 10, three metre high candle like beacons designed by pioneers within the creative industry. The installations, symbolic of birthday candles will also form part of CDW's wayfinding strategy to help guide visitors across the exhibition route whilst playfully celebrating CDW as the UK’s leading independent design festival. With a nod to the area as London’s creative heart, eachinstallation will showcase the designers' individuality and imagination.

CDW’s installation Reflect Us, created by Beau Kerouac in collaboration with ‘The Big Issue’ intends to bridge gaps in society by confronting visitors with 10 door sized gateways to eyes that are sometimes hard to look into, telling the stories of vendors from our city streets. Using AR technology, Beau Kerouac invites visitors to question how an act of respect; simply making eye contact, can change someone's day for the better through shared experience.

SHOWROOMS
From its humble beginnings with less than 40 showrooms participating back in 2010, CDW now has over 100 showrooms involved, highlighting the natural growth of Clerkenwell as a creative area and the flourishing growth of CDW itself. Integral to the festival are the local resident design showrooms, providing an array of stimulating events from talks and workshops to major installations and parties.

Jackie Bergonzi, Marketing Manager for Haworth states: “Haworth will also celebrate its 10th anniversary for having been an exhibitor with CDW right from the start! It’s amazing that we have had the opportunity to be involved and experience the festival grow over the years and gain international exposure. We also embrace the strong relationship that we have with the Media Ten team”.