WonderGlass collaborates with nendo to present Shape of Gravity 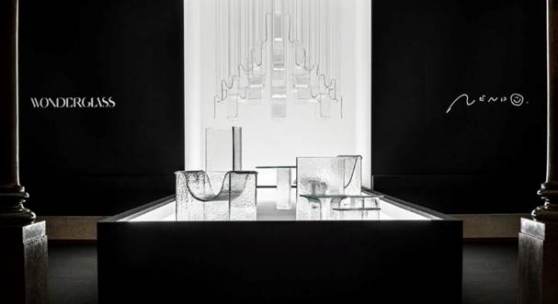 “In a way, doing less and achieving more is the most complicated thing to do.”
WonderGlass collaborates with nendo to present Shape of Gravity an exhibition of gravity formed chandelier, cast glass furniture collection and table top objects during Fuori Salone 2019

Shape of Gravity is an exhibition of works by nendo for WonderGlass, featuring Melt, the cast glass furniture and table top collection and including the launch of a new gravity formed cast glass chandelier which completes the family of products. The 2.5 meter diameter design features sparkling glass seemingly floating in the air that when lit creates a shimmering effect with light bouncing from one piece to the next to provide gentle illumination that details the rippling texture..

About Melt
Melt is the new chandelier, cast glass furniture, and table top collection designed by nendo, which further exemplifies WonderGlass’ expertise and dedication to the extraordinary design possibilities within the glass realm.

The creation of Melt was a unique and complex production. Oki Sato from nendo was inspired by watching the craftspeople in WonderGlass’ workshops working with molten, melted glass. His intention thereafter was to allow the material to direct the design process. This resulted in a method of laying hot glass sheets over steel shapes, then suspended between steel bars to allow the natural drape of the material to reveal its form.

This concept created a challenge to the craftspeople who had to determine an exacting method of timing and temperature to create the desired result as Oki Sato states:

“I was inspired by looking at the workshops, looking at the artisans coordinating their moves around the melted material. The main idea is to accept the flow of gravity and use the weight of glass to design itself. In a way, doing less and achieving more is the most complicated thing to do”.

WonderGlass founders Maurizio and Christian Mussati state:
“We are delighted to have collaborated with nendo on the Melt Collection, working together to push the boundaries and capabilities of cast glass. nendo has explored the molten liquid nature of the material with incredible skill for Melt. Together with our master craftsmen in Venice, they have created a beautiful collection of furniture that focuses on simplicity and the form created by the flow of gravity.

Furthermore, the new chandelier making its debut in Milan as part of Shape of Gravity is a piece we are extremely proud of. The prodigious work suspended in the air like a cloud generates an enchanting shimmering effect when under natural daylight and LED lighting. We look forward to presenting this work along with Melt furniture pieces in the Istituto next month”

WonderGlass x Bar Basso
In addition to Shape of Gravity, WonderGlass celebrates a new collaboration with Bar Basso during Fuori Salone 2019, creating a shimmering display of glass inside the windows of the popular meeting spot for the design community.

On show will be Pixel by WonderLab, a mosaic of colourful glass cubes from WonderGlass’ laboratory of innovation and technology as well as a Vase from the Melt collection by nendo.

Nasse at BTM Officina - Wunderkammer
WonderGlass will further be presenet with Nasse, a collection designed by Marco Zito and BTM at Wunderkammer, an event orgasnised at the Fabbrica del Vapore, which will show the collection in Milan for the first time.