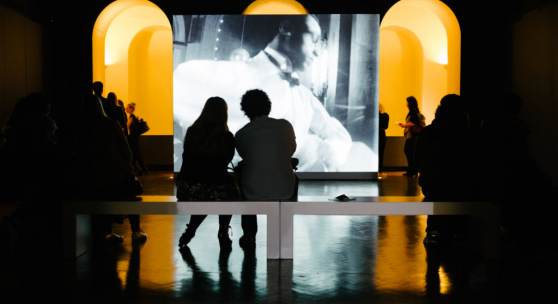 Photo London is delighted to announce the details of its sixth edition, which will feature over 100 exhibitors showing the best of international photography in the spectacular neoclassical architecture of Somerset House. To date, the Fair’s Curatorial Committee has confirmed 94 exhibitors from 22 countries and is carefully considering the last applicants who could further strengthen the Fair’s offer. Michael Benson and Fariba Farshad Founders of Photo London said: ‘We are enormously grateful to our Curatorial Committee for urging us to take time and great care over the curation of this year’s Fair. This has paid dividends. The exhibitor list already has great strength and depth and it gets stronger by the day. We are also delighted to be able to champion the work of so many outstanding women photographers including, of course, our sixth Master of Photography, Shirin Neshat.’

This year, Photo London consolidates its commitment to showing the best historic and vintage photography together with a focus on future directions in photography. This is particularly evident in the development of an exciting group of young galleries, many of whom – such as Black Box Projects, Webber and MMX Gallery— have previously exhibited in the Discoveries section and will now exhibit for the first time in the main section of Photo London.

Roderick van der Lee, Director of Photo London, stated: ‘I am proud to see that this year’s expanded curatorial focus and close dialogue with exhibitors has resulted in such exceptionally strong and considered presentations. Booths exploring either the depth of a single theme, the boundaries of photographic process and material, or the scope of a single artist or time-frame are complimented by an increased institutional presence at the fair in the form of exhibitions and a professional curators symposium. All in all, I think the coming of age of photography is beautifully reflected in this year’s edition of Photo London.’

Under the chairmanship of Philippe Garner, the Fair’s Curatorial Committee has played a crucial part in guiding conversations with exhibitors. This open dialogue with exhibitors has resulted in a series of strong, themed booths, including Bastian (London) gallery’s presentation of Polaroid works from legendary artists Andy Warhol, Cy Twombly and cinematographer Wim Wenders; and Prahlad Bubbar’s (London) of architecture photographs by Indian artist Shubha Taparia and Italian photographer Gianni Berengo Gardin.

Several exhibitors feature artists who will also be presented in major London exhibitions this spring. They include Zanele Muholi at Autograph (London) who will feature in a major exhibition at Tate. Also, Karen Knorr at Sundaram Tagore Gallery (Singapore, NYC, Hong Kong) and Karlheinz Weinberger at Galerie Esther Woerdehoff (Paris) are among the group of photographers taking part in Barbican’s monumental Masculinities exhibition.

This year there is again a significant emphasis on solo presentations in both the Discovery section and the main section. In the main section, these include Miles Aldridge at Christophe Guye Galerie (Zurich); Todd Hido at Reflex Amsterdam; Delphine Diallo at Fisheye Gallery (Paris); Guido Guidi at Large Glass (London); Ralph Ziman at The Rendon Gallery (L.A.); Hsu Ching-Yuan at galerie_frédéric moisan (Paris) and Margaret Courtney-Clarke at SMAC Gallery (Cape Town; Johannesburg; Stellenbosch). In the Discovery section, solo presentations include Alastair Whitton at Black Box Publishing (Cape Town) and Sebastian Cramer at GUDBERG NERGER (Hamburg).

As a new addition to the Discovery section, Photo London has created an informal space to meet and network within the fair. This year, the space will host the inaugural event of Photoworks’ (Brighton) 25th-anniversary programme – a special exhibition celebrating Photoworks Annual magazine and interrogating the institution’s archive.