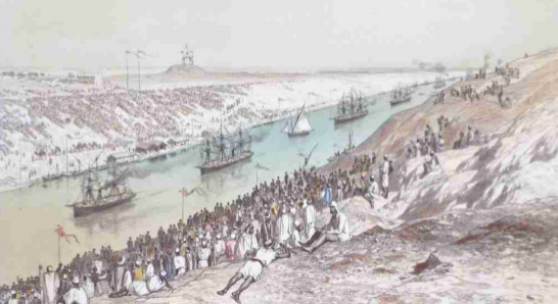 With the 150th anniversary of the opening of the Suez Canal on the 17th November, Meridian Rare Books and Voyager Press are delighted to be bringing a unique collection of books, manuscripts, maps, photographs and ephemera from conception and construction to opening and operation of the canal that revolutionised world travel and trade in the 19th century. They will be showing it for the first time at the Chelsea Rare Book Fair, organised by the Antiquarian Booksellers Association, at Chelsea Old Town Hall on Friday, 1st and Saturday, 2nd November 2019.

This collection of over 150 items illustrates the history and development of the Suez Canal from the early 19th century to its functioning as a fully modern waterway serving the interests of world shipping in the later 19th and 20th centuries. The two specialist dealers have spent years working on this comprehensive collection and are now selling it with an asking price of £35,000. The collection comprises printed accounts, manuscript material, maps, prints, photographs, and ephemera (postcards, medals, souvenirs, menus, calling cards), with an emphasis on 19th century material. Many of the printed books and pamphlets are inscribed or association copies, deriving from contemporary experts such as Charles Manby and J. R. Mclean (both members of the 1850s commission that examined the possibility of the canal), or from the libraries of collectors such as Henry Blackmer and Sefik Atabey.

The collection features the great view book of the Canal, Fontane’s Voyage Pittoresque à travers l’Isthme de Suez (1869). It's a complete copy with all text and plates. Only 500 copies were issued of this first edition with its 25 coloured lithographs. The spectacular album was created to mark the official opening of the Suez Canal with illustrations by Edouard Riou, known for his illustrations to the works of Jules Verne. Fontane, who wrote the accompanying text, was secretary to de Lesseps, and gave the lion’s share of the credit for the Canal to him. This insulted Ismail Pasha, Viceroy of Egypt, who removed the portrait frontispiece of de Lesseps, the preface and the last six gatherings (including the last 6 plates belonging to them) from the 200 copies reserved for him.

It also includes an extremely scarce privately printed diary of the opening ceremony produced by Prussian Kaiser Friedrich III – this being the presentation copy to his cousin, Marie of Orange-Nassau. Tagebuch meiner Reise nach dem Morgenlande 1869 is the first and privately printed edition, published in the 1870s – 154 pages lithographed throughout from the author’s original manuscript. In 1869 the Prussian Crown Prince Frederick William was invited by Ismail Pasha to the inauguration of the Suez Canal. He travelled with his party in October 1869 from Austria to Bari, Corfu, Athens, and Constantinople, then on board the corvette “Hertha” to Palestine and to Port Saïd via Jerusalem, Beirut, Damascus, and Baalbeck. On the 17th November he began the inaugural journey into the Suez Canal aboard SMS Grille. Afterwards he made a voyage up the Nile, staying in Cairo.

Among the manuscripts are original diagrams of the Ismaïlia fresh-water canal built in advance of the main canal to provide water for those engaged in the main project – all five cover sheets with the words “Vu le 8 juillet 1866 Le Directeur Gl. des Travaux” and signed “Voisin-Bey” (the Canal’s chief engineer). There are also original notes regarding the question of Tonnage conferences of 1872, along with manuscripts and letters by Ferdinand de Lesseps from 1855, Auguste Colin’s 1846 estimate of the cost of the Suez Canal, and others.

Two books focus on famous ship groundings in the canal. A log book kept by a midshipman on H.M.S. Royal Oak records the ship’s grounding on the day of the opening ceremony when it collided with the Prince Consort. It offers an insight into the only official British presence at the opening of the Suez Canal. In November 1869 she sailed to Port Saïd to join four other British men-of-war: Lord Warden, Prince Consort, Caledonia, and Bellerophon. The ships had assembled for the opening of the Suez Canal. Ommanney’s log book charts on the 15th November: “Weighed in company with Squadron ... Formed line ahead steering after Lord Warden. 9.30 Ship went ashore. Prince Consort ran into our Starbd. quarter carrying away Starbd. quarter boat & davit & galley”. During the course of the incident business continued as usual.
v The other book is The Blowing-up of the S.S. “Chatham” in the Suez Canal 28th September 1905, the first and only edition published for information purposes by Nobel’s Explosives and contains a full description of the event, with images taken before, during and after the explosion to clear the ship. The Chatham was on a voyage from Britain to Yokohama with a cargo that included 90 tons of explosive and 16 cases of detonators, manufactured by Nobel’s Explosives in Glasgow. On the 5th September she collided with S.S. Clan Cumming, and the impact seems to have upset some lamps, which started a fire. A decision was made to scuttle the ship before the fire reached the explosives, and after considering the possibility of salvage the decision was taken to blow the ship up.