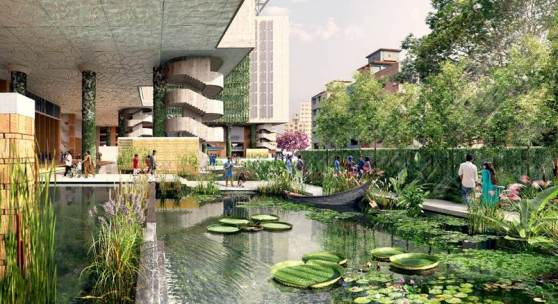 “Singapore is a nation by design. Nothing we have is natural, or happened by itself”. Singapore Prime Minister Lee Hsien Loong. Throughout Singapore’s modern national development, Singapore design can best be characterised as a mindset - one that is determinedly focused on improving quality of life. Through a series of newsletters, we bring to you stories of Singapore designers and projects along various themes that have heightened relevance to the world that we live in today.

Perhaps one of the greatest conjunctions of design, economic progress and quality of life has been Singapore’s commitment to bind its physical growth and infrastructure development to a literal green policy. And so, despite its 21st-century skyline, nearly half the island is covered in natural forest, mangrove reserves, and carefully tendered greenery. This is a remarkable expression of the vision of Singapore’s first Prime Minister and founding father, Lee Kuan Yew, that a major key to differentiate Singapore from its neighbours is to become the greenest and most liveable city in Asia; the idea being that people tend to thrive more when surrounded by nature. There is, after all, little point in being a commercially successful environment if it’s not that is also liveable. The city-state that has frequently been referred to as a “Garden City” became even more ambitious - now, urban planners and policy makers use the phrase “City in A Garden”, an acknowledgement of the primacy of nature in our urban environment.

Designing with greenery and sustainability has always been a strong hallmark of Singapore design. It is inevitable - Singaporeans grow up with incredible tropical lushness co-existing side by side with hyper-modern buildings. Everywhere in Singapore, one sees, smells and feels the tropical nature, enhanced sometimes by sudden bouts of rainstorms. Nature is an incredible source of design inspiration in Singapore, traversing all fields of design.

With our adapted lifestyles during COVID-19 in mind, as well as Earth Day approaching on the 22nd April, on behalf of DesignSingapore Council we are sharing a number of projects from Singaporean designers and architects, WOHA, WOW Architects, Forest & Whale and Roger&Sons that focus on sustainable practices, design for well-being, as well as visionary ideas within the field of green urban development.

"What we see right now is a massive collective effort to stop the spread of COVID-19. It shows that there's a resurgence of the understanding of the importance of the common good. We hope that once the global health crisis is over, this collective effort will be transferred to looking after the health of our planet." - Richard Hassell, co-founding Director of WOHA

WOHA is a Singapore-based architectural practice founded by Wong Mun Summ and Richard Hassell in 1994 which has gained global recognition for their integration of environmental and social principles at every stage of the design process. They have designed a diverse amount of innovative and highly influential projects, which have been built in a number of cities and countries, and their best-known projects have been widely publicised as benchmarks for sustainable design.

Their recent project for the BRAC University seeks to overhaul a polluted wasteland in Dhaka, Bangladesh, to create an innovative and sustainable tropical campus that responds to the hot, humid, monsoon climate of the region. The campus features a public park and facilities for the University as well as a 13-story building, green walls and a giant photovoltaic roof canopy.

WOHA have also recently created the concept ‘Self-Sufficient City’, a design challenge for a new town in northern Jakarta, to house 210,000 people on a 730 Ha site that is overgrown with secondary rainforest and constrained by a 60m building height control limit. The tropical ‘eco-town-in-a-forest’ is self-sufficient in many ways: it is a zero-energy town thanks to the three square-kilometres of solar canopy; bio-mass energy is harvested from waste to power street lights, tram lines and electric vehicle charging stations; 100% of toilet flushing and irrigation needs are harvested from rainwater; ‘Sky Fields’ cultivate 54,750 kg of vegetables per day, enough to feed 210,000 people a portion of their daily greens.

Singapore-based architectural firm WOW Architects have been commissioned to design an eco-resort featuring 24 treehouses shaped like seed-pods, set to open in Mandai, Singapore, in 2023. The biophilic design, created for Mandai Press Holdings, seeks to integrate the resort’s infrastructure with the surrounding natural landscape.

WOW Architects’ concept is sympathetic to the existing vegetation and treelines as well as natural topography. Wherever possible, the resort is elevated several metres above the ground to allow native wildlife to move across the site. It is also designed to be unobtrusive, sitting below the upper canopy layer of the surrounding trees. In addition to extensive planting at the roof and façade of the resort buildings, more than half the trees on the site will be retained, of which 40% are of conservation value. The re-greening effort will enhance the site’s biodiversity through thoughtful planting strategies that will both promote native species on the site of the resort and double the number of trees from today.

In line with this theme of celebrating nature, the resort’s standard and family rooms will offer views into the rainforest. 24 elevated treehouses are being designed in the shape of seedpods and will be set amongst the trees surrounding the resort.

Render of BRAC University by WOHA