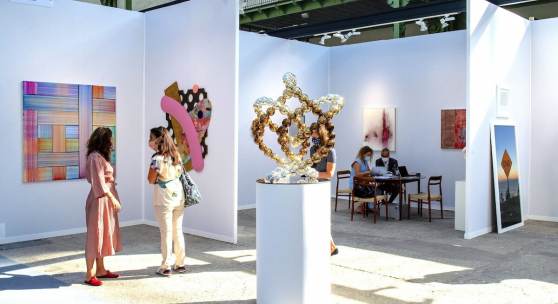 Designed by reknown architect Jean-Michel Wilmotte, this spectacular temporary structure which is situated in front of the École Militaire and close to the Eiffel Tower, will host events scheduled at the Grand Palais until the building reopens for the Olympic Games in 2024.A Strong 2021 Selection Marked by the Arrival of Major Leading Galleries Art Paris has established itself as a major Art fair for Modern and Contemporary art. This forthcoming edition will bring together 140 galleries from over twenty countries, displayingart spanning post-wartothe contemporaryperiod. WhilstArt Parisis a placefordiscovery, its distinctivefeatureis a special emphasis on the European scene combined with the exploration of new horizons of international creative hubs inAsia, Africa,the Middle Eastand LatinAmerica. Regionaland cosmopolitan,the 2021 edition counts 40% of new participants and is marked by the arrival of leading international galleries including Almine Rech, Continua, MASSIMODECARLO, Lelong & co, Kamel Mennour, Perrotin and Thaddaeus Ropac.Portraiture and Figuration. A Focus of the French Art Scene Since 2018, Art Paris has consistently supported the French contemporary art scene byinvitingcuratorstolend a subjective,historical,and critical eyeand todesign a special projecthighlighting Frenchartistsfeaturedatthe fair. For2021,guest curatorHervé Mikaeloffwill sharehis perspectiveon contemporaryFrenchartist with Portraiture and Figuration. A Focus on the French Art Scene, bringing together some twenty artists around the theme of the portrait and the renewal of figurative painting in France.

“Solo Show”: A Showcase of 26 Monographic Exhibitions*This 2021 edition will feature 26 solo shows. These monographic exhibitions spread throughout the fair allow visitors to discover or rediscover the work of modern and contemporary artists in depth.Amongst the highlights, Helene Bailly Gallery (Paris) is presenting a Pablo Picasso solo showwith an ensemble of works- paintings, drawings,sculptures,and ceramics - from between 1919 and 1969. The Galerie Italienne is showing a rare selection of Polaroids and black and white photos by Andy Warhol. The naïve and narrative landscapes of American artist Jessie Homer French are on view at MASSIMODICARLO meanwhile the post-minimalist objects of German artist Gerold Miller are revisiting the heritage of geometric abstraction at Un-Spaced Gallery, not to mention the colourful and gestural abstract paintings of Iranian-born artist Mojé Assefjah at Galerie Tanit.“Promises”: A Sector for Young Galleries and Emerging Talents**“Promises”, the sector that focuses on young galleries created less than six years ago, provides a forward-looking analysis of cutting-edge contemporary art, whether it hails from Guatemala with La Galería Rebelde, Africa on the stands of 31 Project and Véronique Rieffel, China with Galerie Marguo, or Europe with two galleries from Marseille (France), Double V Gallery and Le Cabinet d’Ulysse, and Parisian exhibitors Hors-Cadre, Pauline Pavec and Septieme Gallery. Participating galleries can present up to three artists and Art Paris finances 45% of the exhibitor costs.

Paris, a major center for contemporary art The 2021 edition goes hand in hand with an exceptional period of cultural and artistic renaissance in the City of Light, as illustrated by the opening of foreign galleries and new venues, the renovation of existing cultural institutions and the inauguration of new ones. Paris is asserting its role as a major hub for contemporary art in Europe and this ongoing transformation of the Parisian art scene is reflected in the many activities on offer as part of the VIP programme, which is reserved for collectors and art professionals.GENERAL PRESENTATION OF ART PARIS 2021ART PARIS I 9-12 September 2021 I Grand Palais ÉphémèreART PARIS I 9-12 September 2021 I Grand Palais Éphémère45*with the support of The Wall Street Journal** with the support of Museum TV and The Art Newspaper

Since 2018, Art Paris has consistently supported the French contemporary art scene by inviting curators to lend a subjective, historical, and critical eye and to design a special project highlighting French artists featured at the fair. After François Piron in 2018, Camille Morineau and her association AWARE in 2019 and Gaël Charbau in 2020, it will be the turn of guest curator Hervé Mikaeloff to share his perspective on contemporary French artist with Portraiture and Figuration. A Focus on the French Art Scene, bringing together some twenty artists around the theme of the portrait and the renewal of figurative painting in France.According to Hervé Mikaeloff: “In a “post-medium” era, art is more than ever questioning its relationship to the image. In my focus on the French Art Scene, by choosing the theme of portraiture I am aiming to show the renewal of figurative art. Above and beyond a simple stylistic effect, portraits are a means by which artists can develop a new relationship with the world.