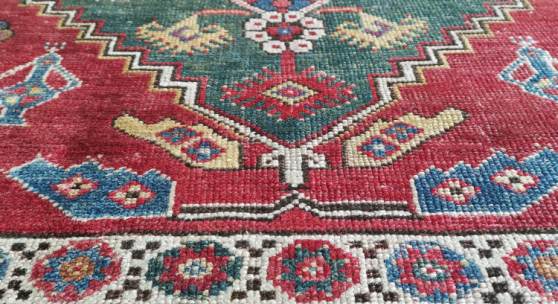 LARTA 2023 - The London Antique Rug and Textile Art Fair returns to Evolution London, Battersea Park, London from Tuesday 24 to Sunday 29 January 2023 and LARTA Online opens at the same time, offering a selection of what is available to buy for those unable to visit the physical fair in Battersea Park, London.The UK’s only specialist event for fine textile art, antique carpets, vintage rugs and associated works of art, LARTA benefits from collectors and interior designers seeking to enhance a scheme.

LARTA founder, Aaron Nejad of Aaron Nejad Gallery said, “Once again we are taking over the mezzanine above the January showing of The Decorative Fair in Battersea Park. We are pleased to be welcoming back LARTA stalwarts, as well as introducing some first time LARTA exhibitors, so we will continue to have an impressive mix of textiles and rugs and carpets from around the world. As usual, many of the items for sale will also be included on LARTA Online.”

New exhibitors this year include Nomadic Rugs Gallery and Shame Studios, both bringing fresh stock and ideas. Returning exhibitors include Owen Parry, a LARTA stalwart, who has an eclectic mix of textiles and rugs including an early 20th century Mali cotton tent blanket, £1,500; a 19th century Korean rank badge, £1,250 and a large late 19th century Şarkoy kilim from the Balkans, £3,850. Emily’s House London, whose shop is based in Battersea, returns with vintage Moroccan rugs of varying sizes and designs in monotone, subtle and vibrant colors.

A Kurdish wool Bidjar rug from West Persia, circa 1880, is an unusual design with rampant lions (usually to be found grounded on all fours) and priced at £4,000 from Aaron Nejad Gallery. Nomadic Rugs Gallery has the same design, although unusual to find, in a singularly soft, luminous colour palette, £4,500. Another unusual carpet Aaron Nejad Gallery is showing is an Indian wool dhurrie dating circa 1900, which wouldn’t go amiss in a contemporary home. The dhurrie is unusually made from wool, so possibly made for the UK market and woven by inmates in jail. The abrash in the pink is variegated, which gives it three dimensionality. The lattice design shapes are not identical lending movement, £2,450. Textiles include a 19th century silk embroidered Suzani from Uzbekistan with a lovely repeating floral design. Woven in five panels, the design is elegant yet quite rustic, circa 1870, £5,850 and a rare 17th century Italian floss silk Hunting tapestry, circa 1680, for sale for £35,000.

Other textiles include an early Mali tent blanket, £1,500 from Owen Parry, who also brings an 18th century Italian needlepoint table rug, £2,850 and a 19th century Korean rank badge, £1,250. Ian Shaw, Tribal Arts & Textiles is showing a fine very early 20th century Ewe Kente in classic autumnal colours, £5,000 as well as a selection of Asafo flags, one of which is from the master flag maker Kwamina Amoaku . He lived from 1895 until 1985 and was a master at the Anomabo workshop on the Cape Coast of Ghana. The owner of the flag was Abina Adonua and his name is represented on the flag. The image represents a group of men pouring libation to the ancestors, £980. Marilyn Garrow Fine Textile Art has a fine selection of antique textiles, specialising in magnificent embroideries both from Europe and the Orient. One such piece is a twenties’ wool embroidery from the Royal School of Needlework, priced at £10,000.

Highlights on James Cohen Antique Carpets’ stand are an antique Oushak carpet from western Turkey, £24,000 and a Ziegler & Co rug, circa 1890, £26,000. Returning newcomer from LARTA 2022, Phil Bell Antique Oriental Rugs has a late 19th century north west Persian runner, £1,500, a work of art that will continue to surprise and delight.