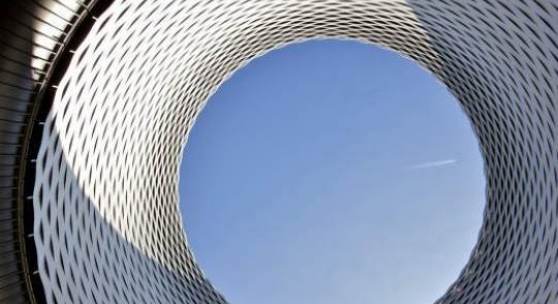 Seth Price’s audio work ‘8-4 9-5 10-6 11-7’ (2007) will be jointly presented by Petzel Gallery and Galerie Gisela Capitain. The artist edited together a single, eight-hour mp3 track of continuously mixed dance music from the last 30 years. The ‘song’ will be played in its entirety at 11 locations throughout Kleinbasel over an eight hour period each day, the length of a typical working day. The title of the work refers to the various working hours one might find in radically different contexts: union labor, office work, art world labor, or the department store.

Galerie Eva Presenhuber and Stuart Shave/Modern Art will show Eva Rothschild’s sculpture ‘This and This and This’ (2013), a combination of three triangles intertwined to create an angular structure, seeming to be resting seamlessly upon each other.

Gagosian Gallery will present a new sculpture by Zeng Fanzhi, ‘Untitled’ (2014). Resembling a plum tree branch covered in a thin layer of snow, the work heralds the advent of a broader aesthetic and thematic direction for the artist and reveals his ambition to incorporate refined elements of traditional Chinese art into contemporary practice.

The opening Parcours Night will feature two special one-off performances in addition to late-night openings of all Parcours sights. Artist, composer, filmmaker and triathlete Guido van der Werve’s 45 minute requiem, ‘home, a requiem’ (2011-2012), presented by Luhring Augustine and Marc Foxx Gallery, will be performed by a 20 string orchestra and 28 strong choir at Clara Kirche at 10pm. The performance is presented with the support of the Mondriaan Fund, Amsterdam, and will be performed by the Orchestra of Europe, Switzerland. The requiem was created to accompany the artist’s latest film work, ‘Nummer veertien, home’ (2012), which will be shown in the Unlimited sector at Art Basel. Jan Mot and Proyectos Monclova will jointly show ‘The Schlieren Plot’ by Mario García Torres. The work is a lyrical essay film that re-imagines the works artist Robert Smithson planned, but left unfinished in Texas between 1967 and 1973. Through a montage of moving images, sound, music and a voice over, the film claims that the Texas’ climate, history and subjectivities actually realize the works and makes them exist, possibly as testimonies of a deliberate forward thinking by Smithson. The work will be screened at Kino Cinema from 8.30pm to 11.30pm, with an introduction by Mario García Torres and Florence Derieux.

Parcours Night takes place on Wednesday, June 18, from 8pm to 12 midnight. All performances on the evening are free of charge, food and drinks are available on-site.