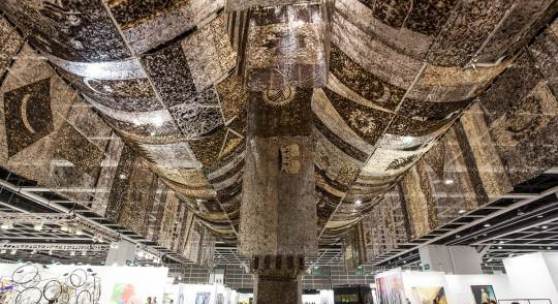 Encounters: Presenting 20 ambitious and large-scale projects by artists from across Asia and beyond.

For her first curation of the sector, Alexie Glass-Kantor turns to Landscape Urbanism, looking at the spaces within cities in which to pause, inhale and reflect before returning to the dynamics of urban activity. Glass-Kantor sees Art Basel's Hong Kong show in many ways as a city within the city: a constructed world that channels the energy and zeitgeist of the international market place. But it is more than that, and, uniquely, Encounters occupies significant exhibition space across four 'meridians' or boulevards within the art fair itself.

'There are distinct thematics that knit through each of the meridians, woven together through visual association and conceptual threads that exemplify how art can resituate experience and enliven the viewer. Many works alter or revisit our view of the world, representing it not as we 'know' it to be, but rather as we innately sense or imagine it to be', says Alexie Glass-Kantor, Curator Encounters.

Information on individual presentations:
As part of Encounters, Kerlin Gallery from Dublin will present 'Intifada' by British artist Siobhán Hapaska (*1963). Consisting of three uprooted olive trees that are suspended horizontally within open aluminum cubes and coupled to constantly vibrating motors, creating a flying forest, floating but trapped, shaking continually in a state of endurance and defiance.

In close proximity, Tomio Koyama Gallery, with exhibition spaces in Tokyo and Singapore, will show 'SEA Brothers Rubber Estate of 16 March' by Malaysian artist Shooshie Sulaiman (*1973). Continuing her interest in language, history and memory Sulaima's work depicts eleven South East Asian leaders on rubber sheets hanging in a smoke house. Referencing her late fathers profession as rubber tapper on the plantations of South East Asia, she gently draws connections between the natural world and the corrupt politics that underscores the global consumption of unsustainable resources.

'Les Spectateurs (Man and Woman)' by Chinese artist Wang Keping (*1949) will be presented by Hong Kong's 10 Chancery Lane Gallery. First created for the 1999 exhibition 'Les Champs de la Sculptures' in Paris, the two large-scale wooden sculptures, each made from a single tree, explore the human form by using the natural components of the wood such as the knots and grains to form the brutal shapes that are transformed into the figures. Now at the age of 65, Wang Keping will no longer be working on works of this scale, making these pieces, which have never before been exhibited in Hong Kong, a precious and unique part of his career.

Arario Gallery, with spaces in Seoul, Cheonan and Shanghai will show 'Chromatophobia' by Indian artist Tallur L.N. (*1971). The installation consists of a giant see-sawing log, or Wish Tree, propped up by two Indian Buddhist sculptures into which local coins may be nailed. In his work, Tallur L.N. exposes the absurdities of everyday life and the anxieties that characterize contemporary society. Exploring magical thinking and the futility of ritual acts that promise to deliver wealth or alleviate financial worries, 'Chromatophobia' is an invitation for a collective act of unrequited hopefulness.

Hanart TZ Gallery from Hong Kong will present 'Beholding the Mountain with Awe No.1' by Chinese artist Xu Longsen (*1956). The monumental ink scroll measures 10.3 meters by nine by nine meters and presents the artist's unique experimentation with the Shanshui art form.

Vitamin Creative Space from Beijing and Guangzhou will show 'Nu Project' by Chinese artist Cao Fei (*1978). Known for her multimedia installations and videos in which she mixes social commentary, popular aesthetics, references to Surrealism, and documentary conventions, Cao Fei's works reflect on the rapid and chaotic changes that are occurring in Chinese society today. Initially invited to make a feature film about the subject of Yunnan, the project reached an impasse. What remains are filmed sequences reconstructed as part of the video installation Nu River Project.

With spaces in Seoul and Daegu, Leeahn Gallery will present 'Around the way' by the American artist Dzine (Carlos Rolon) (*1970). This site-specific installation mines the themes of domesticity; pattern, and craft-making traditions. A continuation to Rolon’s highly successful installation ‘My Mothers Living Room’ at Chicago’s Museum of Contemporary Art, this shrine-like presentation embraces the universal themes of the home.