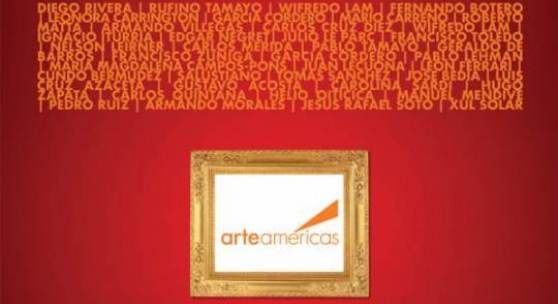 MIAMI BEACH, FL – arteaméricas, the premier fair of art from Latin America, will be returning for its tenth consecutive year. Starting on Saturday, March 3rd through Monday, March 5 th, 2012, arteaméricas will showcase the latest trends in paintings, sculpture and multimedia from contemporary artists as well as renowned masters at the Miami Beach Convention Center.

Right now, Latin American art is hot. It was the subject of conversation at Art Basel and the satellite fairs. The co-directors of Art Basel Miami Beach mentioned “Latin America” numerous times in an interview for the official magazine of the fair. ARCO, the acclaimed fair in Madrid focused on Latin American art in their ads. At the Venice Biennale, Allora & Calzadilla represented the United States, and the MOMA in New York City has a major exhibit of Diego Rivera’s murals.

”We are very excited to continue showcasing Latin American art, and do so with the support of great Latin American artists and galleries,” says Leslie Pantín, President of arteaméricas. “arteaméricas has been the most respected Latin American art fair since it’s inception. We’re proud of this distinction, and for that reason, we raise our standards every year, create innovative projects and recruit the best galleries out there,” he adds.

The best galleries from all over Latin America, the United States, the Caribbean, Canada and Europe will be participating. The three-day arteaméricas event will feature works by internationally recognized artists and sculptors. Likewise, vanguard contemporary artists will be on hand in order to exhibit their works as the latest in Latin American modern art.

arteaméricas is a place where art collectors and art professionals alike gather among the present trends in paintings, sculptures, and conceptual art multimedia that distinguish the region’s art. In 2011, the fair had more than 50 galleries taking up more than 80 spaces and showcasing more than 300 artists. The artists represented by the galleries hail from every country in the Americas and Spain. This year, the fair organizers are developing a special tribute to Argentina. The country will be showcased through its art, which is of high quality and innovation. The legendary Argentinean gallery, Galleria Rubbers, will be at the fair. Also, several other prestigious Argentinean galleries and institutes will be on board to showcase their art.

“For 2012, arteaméricas will feature many new and interesting things; from sculptures, to music performances and art talks,” states Emilio Calleja, fair VP. The “Maestro” Carlos Cruz-Diez from Venezuela is this year’s invited artist. Cruz-Diez, a revered master of geometric art, was chosen by Jeffrey Loria, owner of the new Miami Marlins to install a major work of art in the four acre entrance Plaza at the stadium. “arteaméricas wishes to honor this great artist at our fair along with the Miami Marlins and Art in Public Places who participated in this selection,” adds Emilio Calleja.

Organized by Dr. Marijean Miyar, arteaméricas 2012 will bring back Art Talks, a series of four discussion tables aimed at furthering the understanding of the visual arts, biennial productions and collecting practices. The panels are structured to promote reflection and critical analysis of issues relevant to biennial directors, curators and artists, as well as the formation of private and public collections. Topics will include everything from photography to a talk by renowned artist Carlos Cruz-Diez.

Art Talks 2012 will take place in the Salón arteaméricas, furnished by Poltrona Frau. This area will have theater-type and will also be showing video art throughout the fair’s three day run.

In 2012, arteaméricas will introduce its FOTOAMERICAS section, a photography exhibition open to artists from all nationalities.

The art available at arteaméricas ranges from $2,000 to approximately one million dollars.