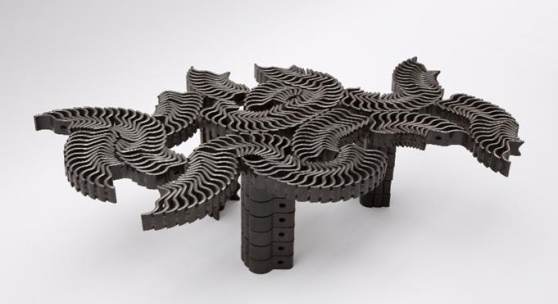 In a continuation of its 10th Anniversary celebrations, Design Miami/ Basel brings together 45 of the world’s leading design galleries, including 12 of its founding members and a number of newcomers to the fair. The museum-quality exhibitions include iconic designers from the 20th century alongside contemporary designers being exhibited at the fair for the first time.

Highlights at Design Miami/ Basel 2015 include the first contemporary adaptation of a Jean Prouvé house, a selection of exhibitions celebrating national treasures from around the world, and new design talents making their Design Miami/ debut.

Founding galleries/
12 of Design Miami/ Basel’s founding galleries from 2006 are participating in the 10th edition of the fair. These include Galerie Patrick Seguin, presenting an adaptation of a Prouvé house by Lord Richard Rogers; Cristina Grajales Gallery with a unique display encompassing Europe, North America and South America with Hechizoo rugs, a Ladd Brothers wall installation and Christophe Côme cabinets; and several beautiful vignettes from R & Company that include a playroom designed by Renate Müller. ammann//gallery present stirring work by Bo Young Jung and Emmanuel Wolfs, while Magen H Gallery presents a collection of objects that explores the differing aesthetics of bronze, iron, steel and marble.

Rock of Ages/
Stone is the oldest known material used by humans for tool-making, yet it still features heavily in modern-day design. This year’s Basel edition examines the use of this elemental material through new works in Basalt by Byung Hoon Choi at Friedman Benda and interpretations in stone at Caroline van Hoek, including work by Florie Dupont, Daniel Kruger and Giampalo Babetto. In addition, Armel Soyer presents a newly commissioned series of Pierre Gonalons works in highly coveted Rouge de Saint Pons.

Flower Power/
Flowers and plant-life have been a constant source of inspiration for designers throughout the ages, and Design Miami/ Basel 2015 is not short of examples of the relationship between nature and design.

Antonella Villanova has commissioned Italian artist Massimo Barzagli to adorn the walls of her booth with beautiful floral motifs to enhance and compliment jewelry with strong natural themes by designer Georg Dobler. Louisa Guinness Gallery presents intricate flower-shaped pins from jewelry designer Claude Lalanne, who manipulates the copper with her own hands to create these intricate brooches, originally made as gifts for her friends. Hostler Burrows also harks back to the natural beauty of flowers with their display of rarely-seen Märta Måås Fjetterström Swedish Rugs, covered in colorful floral designs.

National Treasures/
Very few designers worldwide achieve the status of national treasures. To do so, they need to have made a significant enough impact on their country to be elevated to this level of regard by their countrymen and women. This edition of the global forum for design is fortunate enough to have a selection of the design world’s national treasures. These include French designer Michel Boyer, who’s work is featured heavily in a presentation by Demisch Danant, including a desk commissioned for Elie de Rothschild's office at the Rothschild Bank in Paris.

In addition, Patrick Parrish Gallery dedicates its entire booth to the works of Austrian designer Carl Auböck, who is held in high regard in his own country, but is little known outside of Austria. R & Company presents a very unique display featuring the very first commission of Brazilian national treasure Joaquim Tenreiro, and Galerie Pascal Cuisinier presents a solo show dedicated to the French designer and editor Jacques Biny, with an outstanding collection of light fittings collected over the decade.

Emerging talent/
Since its launch ten years ago, Design Miami/, both in Miami and Basel, has established itself as a launch pad for young designers and up-and-coming design studios. The fair offers the opportunity to present work to some of the most important and influential figures in the design world.

Design Miami/ Basel 2015 bolsters this reputation. The fair will see exhibits favoring new designers, many of whom have never before been represented at Design Miami/.
Galerie kreo presents designers Muller van Severen and Julie Richoz; Ornamentum offers a look into the work of American silversmith Jaydan Moore; Gallery ALL from Beijing displays the works of Naihan Li, Zhouhjie Zhang and Trent Jansen in their first outing as a Design Miami/ gallery; and a host of Lebanese designers, most of which have never exhibited at the fair, will be represented by Art Factum Gallery, including David Nicolas , Marc Baroud, Marc Dibeh, Mary-lynn Massoud, Rasha Nawam, Carlo Massoud and Karim Chaya. Art Factum Gallery is joined by fellow Lebanese gallery Carwan, showing a solo exhibition of the works of Karen Chekerdjian, also a Design Miami/ first-timer.

In addition to the robust offerings from new designers in the gallery program, the Swarovski Designers of the Future award highlights three new designers and design studios in this first edition carrying the crystal house’s moniker.