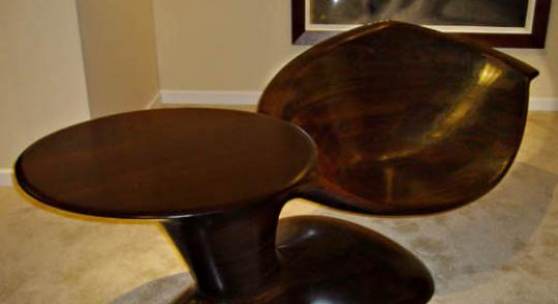 Thought to have some fun at the American International Fine Art Fair by looking for narratives  what the visual works of art have to say, so to speak, and, dealers enjoyed playing along.

Above is a scarf, part of Whitford Fine Art’s collection. A young man approaches a young woman straight on. Her dog is trying to keep him away, because it does not want to share its mistress’s affection. The young lady faces her viewers, and appears uninterested, but her right foot is turned toward him , she is about to turn, (don’t you think?), and face her beau.

Art historian Gabriel Toso, a representative of Whitford, said, that’s possible, but maybe the young man was bringing her flowers, because he was sorry for something that he’d done…

… In truth, Zika and Lida Ascher, famous textile designers in the 40s and 50s (even the Queen of England wore dresses made with their fabrics, he said, adding ladies knew how to dress in those days), asked some well-known artists to collaborate by creating designs. Then the scarves were sold, worn, and enjoyed. Some, though, were preserved. Like this one, “The Lovers Boy and Girl,” which was designed by Andre Derain.

Barry Friedman was showing some of Wendell Castle’s chairs. This one, a table and chair looked very soft, for wood — it’s made of Peruvian walnut. And comfortable, too, a Friedman representative said.

Very organic, it looks like it took root and just started to grow. The grains are lovely, too. How much weight would it hold, since the seat looks to extend from the base of the table? 650 pounds, Friedman said without blinking. He admitted he just made up that number for fun, but added the chair was very sturdy, and it could handle an elephant…

These natural stone fossil murals were at the fair last year but this year, one is hung in the sushi bar — don’t you love it? These, though, are not on the menu — they might be kinghtia escaena…

These fossils are unearthed, extracted by hand from a quarry in the Northwest, and are exhibited by Eostone.

Below are two examples of works by Australian Aborigine artists; they come with stories freely. They are shown at Leslie Smith Gallery and researcher Robbert Hovenberg pointed out that the one directly below shows patterns of animal tracks and baskets.

And this one, directly above, looks somewhat like a map. Before the Aborigines were rounded up, they would make these map-like designs of the desert, a watering hole or some important part of their cosmos. At birth, an Aborigine would have a custodial site (like a watering hole) and the snake would come down from dream time, and curl up around the watering hole, and that presented a clear image to that Aborigine so that he could find the spot again.

This one looks like a bird’s eye view of sand dunes.

Over a period of time, these spiritual symbols morphed into geometric designs, as the Aborigines transferred their talents from a drawing on a “canvas” comprised of their skin or part of their environment to expressing themselves through art with paint on canvas. Often, Hovenberg said, the background would be black, because they used to draw these symbols on their skin. Or red, because they drew them in the sand or on stone.

And this changeover from the spirit world to the artistic world is a fairly new development, he said. Three of the artists, for example, walked out of the wilderness in the 1980s, naked, and having lived all their lives as hunter-gatherers…

The fair continues through February 13. Hours are noon until 7 p.m., and until 6 p.m. on the 13th. It is held at the Palm Beach County Convention Center, 650 Okeechobee Blvd., West Palm Beach. A one-day pass costs $15.

by Christine Davis and Beate Rodewald