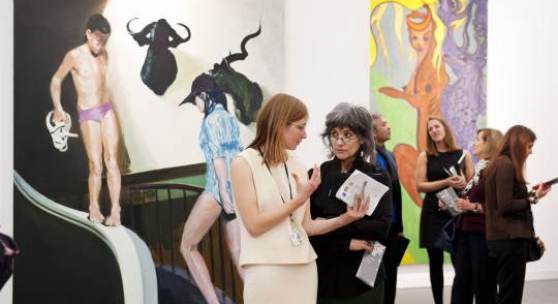 The 12th edition of Frieze London, the leading international contemporary art fair, takes place in London’s Regent’s Park from 15–18 October 2014. Frieze London is sponsored by Deutsche Bank for the eleventh consecutive year. For the third year Frieze Masters, dedicated to art from ancient to modern, will coincide with the contemporary fair. Together the two fairs create a focus for as broad as possible an international art audience.

Housed in a bespoke temporary structure, this year Frieze London is designed by Universal Design Studio, who will introduce a series of changes to the fair; a new layout and a focus on the public spaces, using contrast, texture and tone. Features include a timber-lined entrance courtyard and a series of restaurants and ancillary spaces, each with a signature material. 2014 also sees the introduction of ‘Live’, a new gallery section at Frieze London for ambitious, active or performance-based installations.

Live
‘Live’ 2014 will feature six selected galleries who will show works specially conceived for Frieze alongside the re-staging of a number of significant historical pieces.

These works will be integrated with the architecture of Frieze London; staged both on gallery stands and in public spaces throughout the fair. ‘Live’ is sup- ported by Alexander McQueen, the Associate Sponsor of Frieze London.

Focus
The selection for ‘Focus’ is advised by curators Raphael Gygax and Jacob Proctor, who is a new addition to the team this year. ‘Focus’ has evolved into a more significant section and is dedicated to fostering a community of the most exciting emerging galleries. Notable presentations in ‘Focus’ include: Brian O’Doherty (Simone Subal Gallery & P!, both New York); an instal- lation with Michael Lin and Atelier Bow Wow (Leo Xu Projects, Shanghai); Michael Smith (Dan Gunn, Berlin); Santo Tolone (Limoncello, London); and a presentation of artists exploring labour and materiality, featuring Heidi Bucher, Virginia Overton and Magali Reus (Freymond-Guth Fine Arts, Zurich).

Nicola Lees is the curator of Frieze Projects and has conceived a programme of commissions that brings together seven new commissions, realised both at the fair and in a number of offsite locations around the city. This year has a focus on artists whose practices intersect with other disciplines includ- ing dance, film and music. Many have been produced in collaboration with institutions across London and the UK, drawing attention to the working relationships that crisscross the cultural fabric of the city.