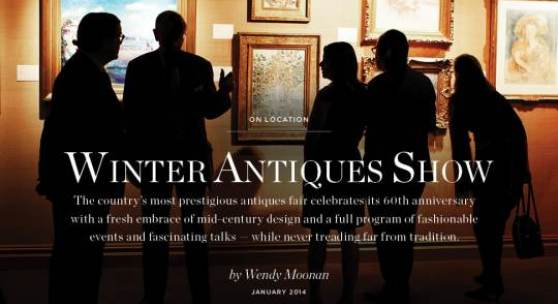 (NEW YORK, NY—August 13, 2013) The Winter Antiques Show’s 2014 loan exhibition will celebrate the Peabody Essex Museum (PEM) in Salem, Massachusetts. Fresh Take, Making Connections at the Peabody Essex Museum is comprised of more than 50 paintings, sculptures, textiles and decorative objects. One of America’s oldest and fastest growing museums, PEM was founded in 1799 and its collection showcases an unrivaled spectrum of American art as well as outstanding Asian, Asian export, Native American, African, Oceanic, maritime and photography collections. The exhibition will be on view during the run of the Winter Antiques Show, January 24-February 2, 2014 at the Park Avenue Armory.

PEM celebrates its 215th year in 2014, and has recently embarked on a $650 million capital campaign and expansion that will place the museum among the top 10 art museums in the country in terms of gallery space and total endowment. The museum’s campus boasts 22 historic buildings celebrating Salem’s rich architectural and garden heritage and Yin Yu Tang, a 200-year old Chinese house that is the only example of its kind in the United States. PEM offers a vibrant schedule of changing exhibitions, a lively contemporary art program, performances, and an interactive education center.

Fresh Take, Making Connections at the Peabody Essex Museum is a microcosm of the PEM experience. Works of art from diverse cultures and time periods are grouped together, uniting and contrasting objects of creative expression in unexpected ways. Highlights of the exhibition range from a spectacular inlaid ivory chair from India (18th-century) to a mahogany dressing chest by Thomas Seymour (c. 1810); from an English brass mariner’s astrolabe used to determine time and latitude by the stars (late 1500s) to a stick chart used by Micronesian sailors navigating the Pacific Ocean (early 20th century); from a view of Salem Common by George Ropes (1808) to a Joseph Cornell collage inspired by Magritte’s surrealist landscape (c.1964); from a bronze Japanese reliquary from the Koki-ji Temple, Kawachi-gun, Osaka Prefecture (1679) to a Chinese bridal headdress made of Kingfisher feathers, silk, pearls, and semi-precious stones (c. 1800s).

One of the many highlights is a striking portrait painting of Nathaniel Hawthorne by Charles Osgood (1809- 1890). The 1840 portrait was painted when Hawthorne worked in the Boston Custom House, ten years before The Scarlet Letter was published. Osgood’s painting is the best-known likeness of the young author.

The founding organization of today’s Peabody Essex Museum was the East India Marine Society. A centerpiece of the exhibit is the 1803 sign painted by Michele Felice Cornè (1752-1845) for the original Society’s exhibition hall. The sign depicts Salem Harbor and a ship, probably the Mount Vernon, on which the artist emigrated from Naples to America in 1800. Banner and letters were added in 1825 by sign painter, Samuel Bartol for the new East India Marine Hall, where it was placed over the door.

A Spoilum portrait of a prominent Cantonese silk merchant is also included in the exhibition (1805). Spoilum (active 1785-1810) was one of the first Chinese artists to work in a Western style, and though he never traveled outside of China his paintings often resemble early American portraiture. The artist is best known for his portraits of English and American merchants, so this portrait of Eshing (a Chinese merchant) is particularly rare. Eshing frequently did business with Salem merchants, and this portrait was acquired as a gift from one of these merchants to the East India Marine Society in 1809.

Demonstrating the wide travels of Salem’s wealthy merchants is a Brazilian headdress collected by Michael W. Shepherd on a trip up the Amazon River in 1847. The mid-19th century headdress is made primarily of red and blue macaw feathers, an important expression of wealth for many indigenous people of South America. This type of headdress would have been worn by caciques (Native chiefs).

Jeff Daly, formerly senior design advisor to the director at the Metropolitan Museum of Art, will design the Winter Antiques Show’s loan exhibition and plans to create a modern kuntskammer to hold the many treasures from PEM, much like they were displayed in the original East India Marine Society exhibition hall.

The exhibition is sponsored by Chubb Personal Insurance for the 18th consecutive year.