WITH A LOAN EXHIBITION FROM THE CORNING MUSEUM OF GLASS

September 18, 2008 -- The Winter Antiques Show announces that The Corning Museum of Glass in Corning, New York, home to the world's most comprehensive collection of glass, will display more than 50 exceptional works during the renowned 55th annual Winter Antiques Show, January 23-February 1, 2009, at the Park Avenue Armory in New York City. The loan exhibition, The Fragile Art: Extraordinary Objects from The Corning Museum of Glass, will present works spanning four continents, more than three millennia, and the full range of artistic ingenuity and technical innovation in glass. The loan exhibition is sponsored by Chubb Personal Insurance for the thirteenth consecutive year. 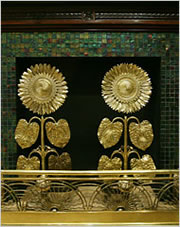 Arie L. Kopelman, Winter Antiques Show Committee Chairman, notes "we are proud to host this unprecedented exhibition from Corning-after seeing the fifty stellar objects in our loan exhibition, you'll want to visit Corning to see the ‘other' 45,000 pieces! It's also a great complement to our two dozen exhibitors who include ancient through 1950s glass in their booths."

The Fragile Art: Extraordinary Objects from The Corning Museum of Glass includes an ancient Roman serving dish cover in the form of a fish, a glass allegory depicting Marie Antoinette and lamenting the demise of the aristocracy during the French Revolution, a covered tumbler that is one of the earliest known dated pieces of American glass, and a 1930s illuminated glass radiator.

Complementing the loan exhibition, the museum will present a lecture series at the Winter Antiques Show; topics range from goblet-making techniques to 1950s glass. Highlights of the exhibition: Cover in the form of a Fish, probably Italy, 1st century A.D. Believed to be the cover of a serving dish, presumably for fish, it is one of only two known examples of this form.Boot-Shaped Cup, Islamic, Egypt, 7th-9th century A.D. The shape of this cup recalls thetradition, documented in Iranian literature, of drinking at banquets from cups known as"wine legs."

Stained Glass Bowl, Probably Egypt, 10th-11th century. One of the most extraordinary stained glass objects that has survived from the Islamic period.

Lampworked Scene, Marie Antoinette Sacrifices the Heart of the Nobility on the Altar of the French Republic, France, Nevers, about 1790. The allegorical scene, signed by the artist Pierre Haly, depicts Marie Antoinette amid classical ruins. Made in 1790 to mark the first anniversary of the storming of the Bastille, and likely commissioned by a royalist client, the work symbolizes the fall of the monarchy during the French Revolution.Drinking Flask, Spain, Catalonia, about 1650-1750. A drinking vessel, or càntir, was often used as a gift for marriages and baptisms.

Cobalt Blue Glass Table, Birmingham, England, about 1880-1884. This blown and cut glass table was made by F. & C. Osler at a time when British and French glass manufacturers tailored one-of-a-kind and limited production glass furniture to the tastes of the wealthy Indian royalty and elite.

Four-layer Vase, Cambridge, MA, 1848-1858. Produced by the New England Glass Company, this vase demonstrates an exquisite and extremely difficult glass cutting technique in which the glass is cut and engraved to show through to each layer.

Tobias and the Angel Covered Tumbler, New Bremen, MD, 1788. One of the earliest known dated pieces of American glass, this covered tumbler was produced at the factory of John Frederick Amelung, the first glass manufacturer on record to start a business after the Revolutionary War.

Sugar Bowl and Creamer, NY, 1835-1850. Created as a pair in either the Redford or Redwood Glass Works in upstate New York, these examples were made from the greenish glass that factories used to make windows. At the end of the day, glassworkers used the remaining glass in their furnaces to make what they wished. American coins are enclosed in the stems of both, probably indicating that these pieces were made to commemorate a special occasion.

Les Iris Sculptural Vessel, Nancy, France, 1895-1900. The work of Emile Gallé, a manufacturer of art glass, ceramics, and wood furniture, is represented by the sculptural vessel, Irises. A dark and complex work designed by Gallé at the end of his life, this piece was influenced by the artist's love of the natural world.

Dish, Finland, 1952. During the 1950s and early 1960s, Scandinavian design, exemplified in this exhibition by the influential Finnish designer Tapio Wirkkala, was internationally popular. Inspired by the northern landscape, Wirkkala used shapes reminiscent of chunks of ice.

Vase with Abstract Decoration, Prague, Czechoslovakia, 1959. Vladimír Kopecký's vase is a rare example of the innovative design that characterized the post-war period in Czechoslovakia, when designers and artists were working under repressive Communist rule.