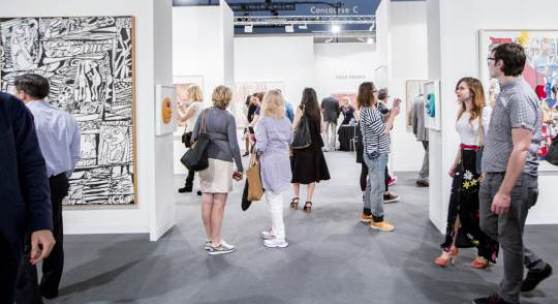 Art Basel’s 13th edition in Miami Beach closed today, Sunday, December 7, 2014, amidst strong praise from gallerists, private collectors, museum groups and the media. Highlights of the show included the introduction of the new Survey sector, which brought 13 art-historical projects to the fair, including many rare works never before exhibited in an art fair context; and Art Basel's staging with Performa of Ryan McNamara's 'MEƎM 4 Miami: A Story Ballet About the Internet' at the Miami Grand Theater. Solid sales were reported across all levels of the market and throughout the run of the show. Featuring 267 leading international galleries from 31 countries, the show – whose Lead Partner is UBS – attracted an attendance of 73,000 over five days. Attendees included representatives of over 160 museum and institution groups from across the world – and a surging number of new private collectors from the Americas, Europe and Asia.

Following a 100 percent reapplication rate for the Galleries sector and with new galleries coming from across the world, the list of exhibitors was the strongest to date in Miami Beach, firmly solidifying the show's position as the leading international art fair of the Americas. Participating gallerists spoke highly of their experience: 'This year's Art Basel in Miami Beach has enabled us to further strengthen our relationships with international collectors, placing key works in important US collections.' Monika Sprüth and Philomene Magers, Co-owners, Sprüth Magers Berlin London, Berlin, London

'Art Basel's show in Miami Beach is the gold standard by which all other art fairs are judged. Its content, audience and presentation are consistently of the highest quality.' Adam Sheffer, Partner/Sales Director, Cheim & Read, New York

'There is always great energy on the opening day of Art Basel's Miami Beach show. We sold more than half of our stand in the first few hours of the fair.' Jack Shainman, Co-Founder, Jack Shainman Gallery, New York

'We have done exceedingly well at Kabinett – it is a great program that allows us to bring special attention to a carefully curated presentation of works. We found that year on year Kabinett generates increased attention and also sales. We enjoy giving visitors the opportunity to get to know the breadth and depth of an artists’ work.' Valerie Carberry, Owner and Founder, Valerie Carberry Gallery, Chicago

'We were excited about the great presentation that we were able to bring for our first show in Miami Beach, in this brand new Survey sector. Tetsuya Ishida passed away in 2005 and we are extremely honored to show his work in the United States. The sales were strong and we are glad to have met many new collectors from the United States and from Asia.' Yumie Wada, President, Y++ Wada Fine Arts, Beijing, Tokyo

'We curated an exceptional 20th century masterpiece selection of works. The response has been overwhelmingly positive from both collectors as well as from our colleagues, proving the importance for a serious classic Modern presence at Art Basel.' Mathias Rastorfer, Co-CEO, Galerie Gmurzynska, Zurich, Zug, St Moritz

'This fair always has a good balance of new and returning audiences and this has only increased as the show has matured over the past 13 years. We have met with a lot of collectors from across Latin America, as well as finding new faces from places as far flung as Istanbul, Moscow, San Juan, Zurich, Paris, Florence, Munich, Seoul and Hong Kong.' Paul L. Gray, Director, Richard Gray Gallery, Chicago, New York

'Art Basel in Miami Beach was a smashing success – one of our strongest ever. Collectors were serious and engaged from the moment the doors opened. Even after nearly selling out our booth on opening day the energy remained high. It's an energizing way to end the season; we can't wait to be back next year.' David Maupin, Co-Founder, Lehmann Maupin, New York, Hong Kong

'We had another successful year at Art Basel in Miami Beach. Museum sales were particularly strong this year with some great curatorial projects now in the pipeline. As always, the Latin American collectors were a strong presence, buying work by our European as well as Brazilian artists.' Alison Jacques, Owner, Alison Jacques Gallery, London 'We have had a wonderful experience in Positions because it gave us the opportunity to focus on Meleko Mokgosi. We wanted to bring a different voice and to present work that isn’t typically seen in an art fair context. The response from collectors, curators and journalists has been affirming.' Honor Fraser, Owner and Founder, Honor Fraser, Los Angeles

'We are very glad to be here in Miami Beach for the first time. The galleries and projects in Nova were well selected, and we are pleased to have garnered interests from new clients not only from North and South America, but also from Europe.' Atsuko Ninagawa, Owner, Take Ninagawa, Tokyo