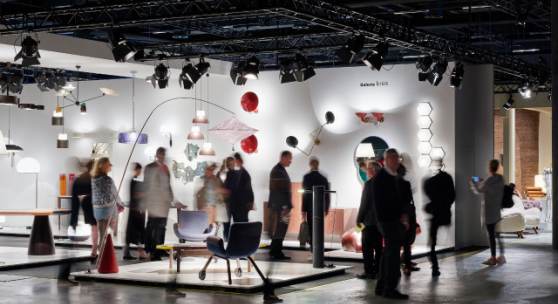 As author of some of the world’s most iconic and storied hotels, André Balazs has established a formidable reputation as an innovator and curator. An early collector of architecture and a great proponent of design, Balazs has collaborated with incredible talent over the years to create these environments. He remains a trailblazer as a collector, creator and collaborator, and was therefore considered the perfect helmsman for this year’s Design at Large program.

The structures selected for Balazs’ edition of Design at Large follow themes of demountability, modularity and environmental awareness, offering perfect examples of a growing interest in the development of manufactured, reusable, customizable and sustainable buildings.

Prouvé’s prefabricated Total Filling Station (1969) was commissioned by the oil and gas company for mass production, and destined for roadside use across France. The near-cylindrical glass and steel structure radiates from a central pillar and has a façade composed of 13 glass and acrylic sheets. Prouvé elaborated on this basic design, also providing larger models with an extra floor or provision for living space. Jean Prouvé, Total Filling Station, is presented by Galerie Patrick Seguin, Paris.

François’s The Flower House (2015) expands on the architect’s key concerns in issues of sustainability and biodiversity, offering a lightweight nomadic structure with a gold façade: a warm reflective surface that allows it to fit sympathetically into diverse environments, whether urban or rural, simple or aesthetically lush. As with the architect’s Flower Tower (2004) and The Building That Grows (2000) this 37sqm dwelling occupies a liminal zone between the man-made and natural environments, intended to share space with whatever vegetation the location allows. Edouard Francois, The Flower House, is presented by Galerie Philippe Gravier, Paris.

Atelier Van Lieshout’s Poolhouse (2015) is a family dwelling that takes architectural cues from the earliest days of human habitation, Modernism’s functionality, and a fantastical future in which no distinction remains between furniture and sculpture. The interior of the organically shaped pavilion resembles a rock-hewn troglodyte dwelling, yet one catering to the mores of the lounging classes, outfitted with a dressing room, children’s play area and bar. Known for a practice that crosses boundaries between art, architecture and design, Poolhouse illustrates Atelier Van Lieshout’s interest in vernacular architecture and mechanization. Atelier Van Lieshout, Poolhouse, is presented by Carpenters Workshop Gallery, London/Paris.

DESIGN CURIO/
The fully immersive Design Curio booths punctuate the main exhibition hall of the fair, acting as spaces in which to focus on projects, ideas, and design-related phenomena not traditionally found in the gallery program.

Andy Coolquitt’s Va (2015) was created during a two-week residency in Guatemala City. The domestic tableau conceived for the installation brings together new works by Coolquitt created in collaboration with local craftspeople, as well as found objects, which will be exhibited alongside a collection of Guatemalan majolica from the mid-twentieth century. Andy Coolquitt, Va, is presented by AG Ossaye Projects, Guatemala City.

The early years of the Soviet Union found designers and architects engaging with principles of collectivism in the domestic environment, furnishing spaces designed for communal activity in house-communes destined for shared multi-family use. The Breads of Communism furniture created by Igor Krestovsky in Smolensk in 1937, intended to reflect the core values of the October Revolution, was produced shortly after the creation of the city’s first skyscraper, and preceded the first All-Union Agricultural Exhibition in Moscow in 1939. Igor Krestovsky, Breads of Communism, is presented by Heritage Gallery, Moscow.