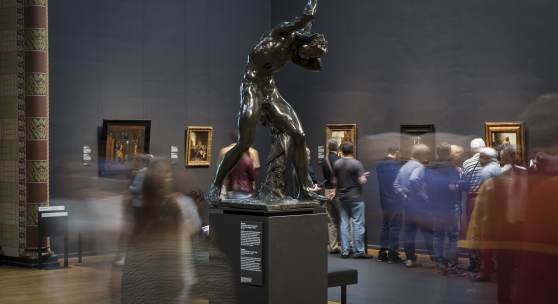 The new acquisition, an exceptional 17th-century sculpture by Adriaen de Vries(1556-1626), can be seen from today on in the Gallery of Honour of the Rijksmuseum. The bronze is considered to be one of his best works. No other statue by De Vries has been in Dutch art collections until now.

he masterpiece has been acquired in December 2014 with the generous support of the Rembrandt Association (and the Prins Bernhard Cultuurfund), BankGiro Lottery, the Rijksmuseum Fund, the VSBfund, the Mondriaan Fund, a private donation and the Rijksmuseum International Circle, enabled the Rijksmuseum to acquire this important work of art. With this very generous support this private and institutional funds endorse the particular importance of this purchase for the Netherlands Collection.

Wim Pijbes, General Director of the Rijksmuseum: Adriaen de Vries is the Dutch Michelangelo and his works are equally rare. Therefore it is absolutely great that we have been able to buy this fabulous sculpture for the Netherlands with the very generous support of many private donors and institutional funds.

Dated 1626 and probably the last autograph work by De Vries the bronze represents the mythological figure of Bacchant. It displays the virtuoso and highly individual modelling style for which the sculptor was celebrated during his lifetime. This exceptionally sketchy, free and tactile style reached its apogee in the final years of his life and shows him as a true artistic innovator, centuries ahead of his time.

Born in the Hague in 1556 the ´imperial sculptor’ Adriaen de Vries enjoyed his greatest successes abroad. After a career in Italy and Germany he was appointed court sculptor to Emperor Rudolph II in Prague in 1601, the greatest collector of art of his time. The sculptor remained in Prague until the end of his life, working on commissions for princes in many European countries.

For a long time Adriaen de Vries was one of the secrets of art-history, a highly original genius, only know by a handful of insiders. The successful international exhibition devoted to the sculptor that the Rijksmuseum organised together with the Nationalmuseum in Stockholm and the J. Paul Getty Museum in Los Angeles in 1998-2000, has led to a wider appreciation of his bronzes and a revaluation of his reputation; nowadays he is considered as one of the most important sculptors of the early Baroque.

Rediscovered by chance
The bronze statue of Bacchant was rediscovered by chance in the courtyard of Schloss Sankt Martin (Austria) in 2010, where it had been since c. 1700. Most likely it was sold by the Dutch heirs of the sculptor after his death in 1626.

Sculptures by Adriaen de Vries are kept in all major museum collection of the world. The Rijksmuseum owned the only work by the master in the Netherlands, a bronze relief of Bacchus and Ariadne. In addition, since 1977 it shows a larger statue of a seated Triton as a long-term loan from the Nationalmuseum in Stockholm. The acquisition of Adriaen de Vries’ Bacchant fulfills an old wish; for the first time the sculptor is represented in a public collection of the Netherlands with a major work. The bronze will be on view at the Rijksmuseum form the Spring of 2015.